I have a real soft spot for nonprofits. The work they do is really important, and they make a huge impact on our communities. So when we decided to highlight Cars for Neighbors for this month, I was genuinely excited to learn more about this nonprofit, what they do exactly and the people behind it.

There was a lot of commotion at the Anoka County Services building and after finding the correct suite I was ushered into a large waiting room where Jim came to greet me.

“There’s a job fair here today,” Jim said without me needing to ask the question. “I’m sure you were wondering what all the commotion was.” I nodded as we walked back through Cars for Neighbors suite past the “cube farm” as Jim called it, and into his office.

As we sat down at a little round table I noticed that there was a lovely view of the outside. The sun was bright and the red trees reflected off the little pond which wasn’t far from the building. I decided the professional air with a homey touch was perfect, and it didn’t take long to realize that’s just what Cars for Neighbors embodies.

My first impression of Jim was that he is extremely intelligent, analytical and that he loves what he does. A perfect person to oversee the ins and outs as a nonprofit such as this one.

Since I didn’t know much about Cars for Neighbors, I asked Jim if he could give me an overview before we went into some of the finer details. He nodded. “Cars for Neighbors was started in 2000 incorporated under ‘Free to Be’ which also had a daycare service. This was because ‘Free to Be’ recognized two barriers to people working. The first was affordable childcare and the second was safe personal transportation. In 2003 they stopped the daycare portion (couldn’t do it all and others were providing that service).”

Jim went on to explain the two main services that Cars for Neighbors provides. The first is giving people donated cars and the second is a car repair clinic where people can bring in their cars to get fixed. “We partner with a lot of shops in the area, Meineke being one of them,” Jim said. “Really, it isn’t hard to find car repair people in the community. Some of them are long-term partners, others will take on a special project.”

I found the vetting process for the donated cars really fascinating. When a car is donated a comprehensive multi-step inspection is done to see if the car can be donated or if should be sold for spare parts. “Cars are very complicated and unpredictable,” Jim told me. If the car can be donated, it goes to one of the partner shops for repairs. “We partner with Nappa and they sell the parts to us at cost, and Meineke cuts labor costs,” Jim continued. “We’re really able to leverage our dollars because of that.”

After a car is repaired Cars for Neighbors does a test drive before they hand the keys. “A few years ago almost 80 percent of the cars we gave to people needed additional repairs after they were handed off. Now it’s 11 percent,” Jim paused when he noticed my eyes going wide. I told him that was a really substantial decrease. He nodded, “Our goal is to stay under 15 percent, but that means having to make some tough decisions when it comes to cars.” 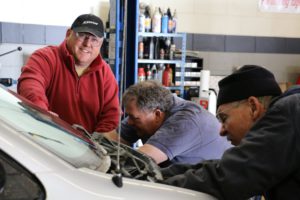 The Car Repair Clinic happens twelve times a year on a Saturday. Jim told me they usually have six men who come and Meineke allows them to use the garage for free in the morning. Those who need car repair can fill out an application to see if they qualify, but they don’t have to have a donated car from Cars for Neighbors to get their car repaired.

I asked Jim to tell me a little more about the rebranding process from “Free to Be” to “Cars for Neighbors.” He shifted and leaned forward slightly. “It was really a question of, ‘Who are we serving?’ And the answer is, our neighbors. Our kids go to school with their kids. We may stand behind them in a grocery store or sit behind them in a church service. We are the local option because we’re not picking up cars in all fifty states. One way or another everything helps our community. Our neighbors. It really resonates with people.”

I agreed, and found myself wishing (not for the last time) I knew about Cars for Neighbors when I had to scrap my vehicle last year. Hearing Jim talk about how they are directly tied to the community made it easy to see that when you donate to Cars for Neighbors, your donation doesn’t just get lost in the shuffle. Everything is local, and you’re directly connected to the community.

I asked Jim to tell me why he decided to work for a nonprofit. Was it something he always wanted to do specifically or did he just find himself in the middle of it.? “It wasn’t something I was looking for specifically,” Jim said. “But my dad was a prison chaplin when I was growing up, and as kids that’s how we were raised. It was expected of you to help people. I think it’s a good calling to help others when you can.”

It’s a simple answer really, and it’s something I’ve noticed with all the chamber members. Whether working for a nonprofit or not, everyone has brought up this same point. We can all be doing something to help others. But when you reach out to your neighbor or friend in need, oftentimes they impact you just as much as you help them. Jim began to tell a story of one woman who he found particularly inspirational. “Her name is Baidaa,” he began. “She was from Iraq, and when I called her to tell her she was approved for a car and the only thing left was the financial literacy class, she said, ‘Oh I already did that in 2014,’ which really surprised me.”

Jim recounted when they met Baidaa to hand her keys he ended up asking her why she took the class so early, especially when she didn’t have a license. “Baidaa had the biggest smile,” Jim said, “And she was the most joyful person. She fled Iraq for Jordan and always knew the US was the best place for her family. She told me she took the class that early because she always knew she’d need a car. Now Baidaa is taking classes for home financing. Her daughter is in the military. She was telling us all these things she went through like she didn’t have a care in the world.” 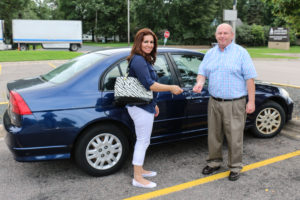 Baidaa gets the keys to her new car

The personal side of Cars for Neighbors is rewarding, but like most nonprofits, you work with people who have difficult stories. “We had a woman come in to get her car fixed, and found out that the car didn’t lock, “Jim said. “This woman was homeless with her daughter and living out of her car. We don’t do work on Tuesdays, but the volunteer was adamant. He worked for 2 hours to fix her car so at least she’d be secure.”

Jim told me his volunteer went to a church that was part of a collective which allowed homeless people to have shelter. He got her connected, and through that she was able to get a job. “Last we heard she was saving up to get an apartment. This was during the recession and this woman had a degree in accounting.”

Jim and I sat for a moment in silence as we thought about the weight of this woman’s story before we moved on. I asked Jim to tell me what he’d like to see happen in the next five years at Cars for Neighbors, “That’s a tough question,” he said folding his hands. “I’d like to tell you that we’ll be doing more. With the increase in cost of repair and diagnosing problems, it can be hard. The computers in the cars make it difficult,” he said. “But, remember that financial literacy program I was telling you about?” I nodded, and he continued. “I’d like to see that expanded. When you give someone a car, you’re giving them a financial responsibility. And if we can make people look at their relationship with money, that’s the other piece to helping people be successful.”

Jim and I continued to talk about the grittier parts of running a nonprofit, even down to how the steal market affects how much car parts cost. It was clear to me that Jim truly has a handle on both the big picture and the finer details of the nonprofit, making him the perfect person for the job. I felt really impressed with him and Cars for Neighbors as a whole.

“I’ve lived enough life that you realize that stuff is great, but at the end of the 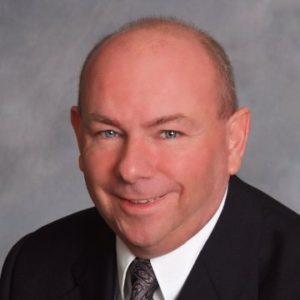 day is just stuff,” Jim said. “I love cars, but I’ve never had a nice car. I go to car shows to look at nice cars, and I don’t fault people for having them, but I guess it’s just not a priority.” He recounted how his daughter has a developmental disability. “We have spent weeks in the hospital with her. If you pay attention life teaches you something through those,” he concluded thoughtfully.

If you’d like to read more about Cars for Neighbors or donate please go to carsforneighbors.org or call 763-717-7755.