Tales from the MetroNorth Chamber: May Character Exposition 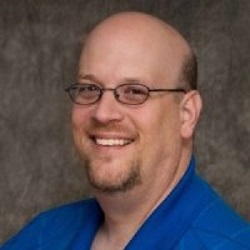 I was greeted by Steve Griffiths of Impact Services with a warm smile and a firm handshake at the Caribou off 35W and County Road D. A soft-spoken man with glasses and a goatee, I could already tell Steve was made of the “nonprofit” material, and I was really looking forward to talking with him about the ins and outs of Impact Services. Having some background in nonprofits myself, it always impresses and fascinates me how each nonprofit seems to find its niche to make the world a better place.

Steve is the type of person that immediately puts one at ease. After settling into my chair and telling him about the interview process, he immediately asked me some questions about my background. Most people do, but because of our similar history, I knew Steve would understand my journey in a way most other people simply couldn’t. True to the caring type, he asked me to elaborate on my own story and offered encouragement. I smiled because while Steve knew this wasn’t about me, he couldn’t help himself. He had to care; that was simply part of his nature.

Redirecting the conversation, I asked Steve to tell me a little bit about Impact Services. He heaved a small sigh and smiled saying, “Well, what do you want to know?” I asked him to give me a short overview. “Our name used to be Anoka-Champlin Meals on Wheels, but we changed it to Impact Services about three years ago because we wanted to explore opportunities for greater value in our organization. Providing nutritious meals is a conduit to what we’re doing, which is making sure people are okay in their own homes.” I asked him to elaborate on what that meant exactly. “It’s a wellness check. Our volunteers aren’t invasive, but they make sure people are safe and physically healthy. We serve about 100 meals a day,” he said. I raised my eyebrows in surprise. Though it seemed like that was a lot, I wasn’t sure how it compared to the other Meals on Wheels programs in the Twin Cities. When I asked Steve, he confirmed that their program was larger than most.

“We also have something brand new called ‘Family Aging Education’ which equips families to help their loved ones age gracefully.” There was something in Steve’s tone which shifted when he mentioned this new service. I could tell that whatever this new program was it was very important to him, and I made a mental note to ask him for more details later.

In the moment, my curiosity centered on how he ended up at Impact Services. Was he always in the non-profit world? “My first job was at a nonprofit which helped teach kids economics,” Steve said. “Great mission, but not something I was really passionate about. I realized that my mission in life is to help people become who they’re meant to be. I’m a big believer that the people need the basics in life to care about the higher level things.” I found Steve’s personal mission statement very interesting and found myself wondering about my own life’s mission statement. Could I sum up how I wanted to make the world a better place in a single sentence? And what would happen to a society if everyone had and acted on a single mission statement such as Steve’s?

I refocused my thoughts and continued to listen. “I’ve spent 20 years in the nonprofit world and I love it. My introduction to Impact Services was 10 years ago. At the time, Anoka-Champlin Meals on Wheels tasked the church volunteer board to find people who had more business skills. Since I wanted to be on a board I said yes, and eventually I took over as executive director in 2011. When I was on the board we were experiencing a lot of growth. We had just taken over another territory and our executive director was an amazing systems person. Her skills were perfect to transition us, something I couldn’t do. After that, we needed someone to share our story, and that’s where my skill sets really come in.”

Though Steve and I didn’t talk much about the switch in leadership I thought about it after I had left. I wondered how success would be measured if companies thought of their leadership as “the right person for the job for the moment” instead of always trying to find someone who is good at everything.

“After we took on the new area,” Steve continued, “our organization wanted to find other ways to serve. We started thinking about what families need to talk about before a crisis hits with their aging loved ones. We wanted to equip families to help their parent’s age with as much dignity as possible. That’s where our Family Aging Education came out of.” As Steve began to describe Impact Services newest endeavor, it occurred to me that I hadn’t heard of anyone else doing this type of work. “I see so many people go into crisis management mode when something happens,” he continued. “Our goal is to help people plan ahead so they can be better prepared. The curriculum we’ve come up with is simply a conduit for a bigger discussion. It’s uncomfortable. You’re talking about mortality and unfortunate events.”

Steve continued to explain to me in greater detail how the curriculum helps facilitate the discussion about aging parents. In their research, Impact Services brought experts from many different fields and had a discussion about the biggest problem areas for aging adults. What came out of those meetings was broken into five separate categories. There’s legal, financial, housing, safety and security and personal care. According to Steve, the discussion about aging parents needs to consist more than their living will and power of attorney. If the goal is to keep aging parents in their home as long as possible, it’s important to think about their life as a whole. That may require getting meals delivered or renovations such as a ramp or slip bar in the shower. “Our goal is to point people in the right direction,” Steve said. “So when they realize they need more help in one of these areas we can be a resource for them.”

I immediately wondered if Impact Services would offer more than simply a take home curriculum, and asked Steve if they would offer training or discussion groups. He smiled and chuckled, indicating that my questions were something their nonprofit had already discussed. “Eventually. We do a lot of partnering with churches, so we’d like to see people teach the curriculum and have small groups. We’d also like to see organizations who work with aging adults use our curriculum to train the people they help.”

Though the Meals on Wheels program and Family Aging Education might seem like two different things, they are both under a larger umbrella. The goal Impact Services has is to help people live independently and stay in their own homes and each of their programs helps aging adults do that.

I commented to Steve that Impact Services has relatively few offerings compared with other nonprofits. I asked him if they intended to keep expanding their services. “We’ve just signed on as the lead agency of an initiative for ACT on Alzheimer’s in Anoka. It’s a brand new community initiative to help make Anoka a place that’s friendlier to those with Alzheimer’s or dementia. There are about six entities involved in that, which is exciting.”

I asked Steve if Impact Services ever struggles against the tide of taking on too many projects, as many nonprofits seem to struggle with. “We want to find the three to four things we’re good at and do them with excellence. We’ve got three balls in the air, and that’s enough for the moment. We’ve been doing Meals on Wheels for 40 plus years, but we need to continue innovating. Family Aging Education has been a year and a half in the process. Things take time.”

From my own experience with nonprofits I’ve noticed that “less is more” can make a bigger impact than trying to do everything. Steve agreed with me. “It’s very important that an organization remains sustainable. Nonprofits have that ‘mission creep’, where they take on more than they should because there’s funding or they feel like they have to. But unmanaged growth is almost as bad as a stagnate business.”

I stopped for a moment because the truth of Steve’s last statement was so weighty. I repeated it back to him slowly. He nodded. “If you are offering a service but can’t put your energy behind it, then what’s the point? It’s important to be mindful of expanding so you do it right.”

That doesn’t mean Steve isn’t thinking about the future or has big dreams for Impact Services. “This educational program is going to be transformational. We’re offering a resource to people that comes with no strings attached. I’d love to see other nonprofits eventually contract with us to use our curriculum. I see the potential for it,” he said excitedly. “It blows my mind a little bit. When I started at Impact this curriculum wasn’t even on the radar. But when you’re presented with an opportunity that’s going to impact so many people you go for it. I’m just fortunate enough to be a part of it, and carry the ball down the field as it were.”

Steve and I continued our conversation about nonprofit and church philosophy for some time. “We could talk about this stuff for days,” he said. I laughed. “I will say,” he said, a small smile playing across his face, “that I’m very blessed in the work that I do. I get to do something I’m passionate about every day. I’m truly humbled.”