Lance Baumgard and I have breakfast at the Good Earth restaurant and talk about what it takes to be a chiropractor, music, and how to balance work so you can be at your absolute best 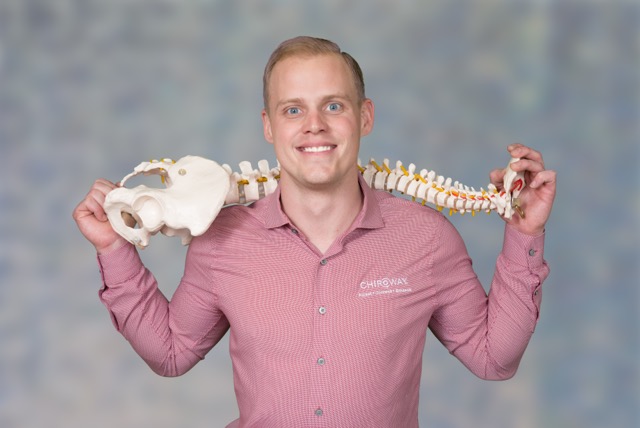 From the moment I saw Lance Baumgard walk through the door, I knew this interview was going to be filled with exuberance. With sandy short blonde hair, Lance walked through the door wearing a collared shirt with the ChiroWay logo embroidered on the chest. I went to extend my hand, but Lance grinned, and pulled me into a giant hug, explaining he was a hugger. I laughed, saying I was one as well.

Sitting down at our booth, I could almost feel the energy buzzing off Lance as he gently tapped his fingers on the table while looking at the Good Earth menu. “I feel like breakfast,” he said decidedly. I nodded, also noting the choices, and decided to order breakfast as well. After coffee was served and the laptop was out, we were ready to get started.

“I started practicing chiropractic when I was 25, and I hit the ground running,” Lance said with a knowing look on his face. “I was really active when I was younger. I loved playing sports and running off energy with neighborhood friends. I was also fortunate enough to live on a lake, so I grew up around watersports with the family and really loved doing tricks on a wakeboard. I carried that confidence on a wakeboard to snowboarding in the winter and was quickly humbled when I tried to do a stunt and I fell right on my neck,” Lance said while instinctively grabbing his neck. “It was a bad fall. I learned that falling in the lake was much better than falling on snow and ice. I could barely move my neck. Thankfully, my neighbors who lived near my parent’s house owned a chiropractic office and encouraged me to get adjusted after the snowboarding accident. I got adjusted a few times and thought, ‘Oh my gosh, this is amazing,” because I felt so much better and my range of motion in my neck returned to normal. From that point in eighth grade onward through high school, I would periodically get adjusted because I knew it allowed me to perform better in hockey, baseball, and in the classroom.

Lance’s varied sports background didn’t seem surprising and fit perfectly with his high energy level. I was a bit surprised, however, to learn Lance initially wanted to go to college for civil engineering. “My dad was and is part of the Army Corps of Engineers,” Lance explained. “But when I took calculus in high school, I realized, ‘Hmm, maybe I don’t like math as much as I thought I did,’” he laughed. His comment reminded me of something similar Tess DeGeest said in our interview last month. Maybe it’s a theme, I thought briefly before moving on. “It was around that time when my chiropractor once told me he thought I would make a good chiropractor, and so I decided that’s what I would do.”

After high school, Lance went to Minnesota State University-Mankato and then transferred to Northwestern Health Sciences University, graduating just before he was 25. “The craziest thing I ever did in college, was saw a human head in half,” he gleamed. “It was for an anatomy class in chiropractic school and I was oddly super excited about the odd opportunity. That morning I woke up and I said to myself, ‘I’m never going to be able to do this again without getting thrown into prison and having the guards throw away the key.” This caused us both to laugh.

During the process of getting a degree, Lance shadowed different types of chiropractic offices to finalize what business model he was going to use. “When I went to visit Trent Scheidecker, D.C. at ChiroWay, I really enjoyed the wellness aspect of it. There were kids running to the table to get adjusted, and there was no other office I had seen like that. It was a huge shift for me.”

This prompted me to comment on just how extroverted and people-orientated you must be as a chiropractor. Having visited a chiropractor many times, the energy level and personal touch are different than that of a traditional medical clinic. It’s not that traditional doctors aren’t friendly or personable, but generally speaking, the experience you have at a chiropractic office is much different than the one you’d have at a medical clinic. Lance nodded vigorously. “That’s one thing that attracted me to it. It requires a lot of mental energy and allows me to be creative. It definitely keeps me on my toes.”

Starting a franchise is not an easy task, and I asked Lance if it was difficult adjusting to blend being a chiropractor and business owner since you usually don’t think of the business aspect when attending chiropractic school.

Lance smiled. “In between my undergrad and graduate degree, I was living with my uncle who has a boat dealership and ranch. We’d spend maybe ten to twelve hours at the dealership then spend another six to eight hours on the ranch. That’s when I learned what it took to be a successful businessman. I was very fortunate to have those lessons and to share that summer experience out there.” He nodded thoughtfully. “I have been grateful to have such a supporting cast of friends and family.”

This month Lance is celebrating five years owning his ChiroWay franchise, and I was curious for more details about the office. I started by asking if it was just Lance, or if he had other people in his office. “It’s just me running the show,” he confirmed. “I offer wellness plans at $59 per month for four adjustments, with no appointments so you can come in, during my open adjusting hours, whenever you want.” My eyes widened, and I commented on how good of a price that was. “Because I operate individually and keep a low monthly overhead, I can pass that savings onto the people I am giving chiropractic care to,” Lance said. “I try to make it convenient and affordable for people to receiving chiropractic care as part of a healthy lifestyle.”

Running a business, caring for patients, and doing a lot of physical activities requires loads of stamina. I asked Lance if there were any activities he used to recharge. To my delight, Lance revealed he has a deep love of singing and writing his own music.

“I like to play an acoustic style of music. I’ve been told my voice has some similarities to Jack Johnson and John Mayer and I most like to sing my own original songs. It’s been a little uncomfortable to share these original songs, but I’ve been told that you have to chase discomfort in order to grow,” he said seriously.

I smiled, recalling a Pandora Station of mine that’s ten years old, and is a mix of acoustic guitar music. I told Lance I find that type of music comforting and asked how he got into playing guitar.

“It was after high school,” Lance began. “In my first year of college I had a lot of free time because I wasn’t involved in athletics anymore. I was playing guitar hero a lot. You know that song ‘smells like teen spirit?’” he asked with a smile. I nodded. “Well, I was playing it like five hours a day in expert mode to get it perfect. And then I thought, ‘What if I practiced with an actual guitar?’ So, I bought a guitar, and at first, I sounded awful,” Lance laughed. “But I slowly got better. Then I took an intro to poetry class down in Mankato. The class was centered around reading poems, interpreting poems, and gaining a deeper understanding of how each word fit into the complexity of a line and how it can invoke emotion. During and after that class, I started to write my own poetry, some of which turned into songs. It became like…” Lance paused, “a puzzle to piece together using words to convey the expressions of whatever I was feeling at the time.”

We began to discuss the difficulty of poetry, something I personally discovered when I tried to take a poetry writing class. Poetry was especially difficult for me. Anytime anyone says they enjoy writing poetry, I find it rather amazing, especially when the love of poetry is combined with music.

For Lance, music and outdoor activities are how he keeps himself grounded and ready to bring his A-game to the office. “If I don’t take some time for myself to take a walk outside, read a book, or play guitar, I can notice the energies within my office aren’t quite what they should be. I think the mind needs positive adjustments, just like the body, to live to its potential.”

When it comes to success, I feel the unsung hero is self-care, and I expressed as much to Lance. We talked about how businesses used to run just fine when there were only wired phones, but in the days of the smartphone, business owners feel the pressure of working even after the day has concluded. “It’s important to set technological boundaries for me,” Lance confirmed. “I learned it out on the ranch, where we had no cell phone service and a landline. To me, there’s more to life than living on your phone, which is why I ‘technologically detox’ once a week for most, if not all, of the day.” 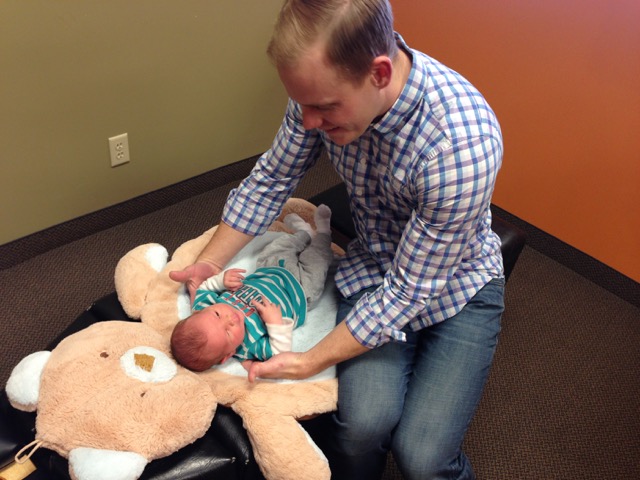 Lance provides an adjustment for a baby

During our discussion, I noticed Lance mentioned chiropractic care for children a few times, and asked if that was an important aspect of his office. “Most definitely,” Lance confirmed. “One of the reasons why I promote an affordable, wellness based chiropractic approach, is so that we can allow the entire family to benefit from care. We all want what’s best for our kids and we want them to be healthy. The neurological system, which is protected by bones of the spine, is the primary component to promoting proper function throughout the body. If we can achieve proper spinal health through chiropractic adjustments for these kids, we can provide proper neurological function, which allows them the ability to grow up to their fullest potential.” Lance continued. “I feel very honored and I don’t take the job lightly, that families trust me with their children. Hopefully, they see me as a role model and a positive influence on their kids. I learn just as much from them as they do from me.”

When asked what the future looks like, Lance said, “The focus will be on continually growing my business, participating in more volunteerism with the community, and promoting my music outside of the office.  I just had a ribbon cutting with the MetroNorth, which celebrated five years in business and five years in the chamber.”

I also asked Lance to provide me with ways to listen to his music. He’s working on his Facebook fan page and also has a YouTube channel. The goal is to play one to two times a month, so please keep an eye out for Lance’s future shows. After listening to his music on YouTube, I highly recommend it.

If you’d like to connect with Lance and learn more about chiropractic care please visit his website or Facebook page at https://www.facebook.com/ChiroWayBlaineChiropractor/. If you want to listen to some of his music (you do!), check out his YouTube video below! You can also subscribe to his channel here.