Karen Andler of Vision Staffing and I walked into Caribou at the exact same time, making it easy for us to find one another. Wearing a black zip-up jacket with Vision Staffing’s logo, Karen greeted me with a warm smile, and I immediately knew this was going to be a real treat. She ordered her drink first, and then as Karen passed me, she quietly whispered the answer to Caribou’s daily trivia. I maintained my composure when ordering my drink, and “operation get ten cents off” was a success. Before I sat down, Karen asked if I had heard what she whispered. I grinned and nodded, expressing my gratefulness, since I would not have known which street the Munsters lived on. “I heard the person in front of me answer it correctly,” she confessed.

The first thing I wanted Karen to tell me was a little more about Vision Staffing.  “Vision Staffing has been in business for the past thirty years,” Karen began. “It’s fully female owned and operated. Mary Farr started in back in the 1980s, and now her daughters are running it. We have twenty-five employees with offices in Rogers, Blaine, and Bloomington.”

This was my first time ever meeting someone who worked at a staffing agency, and I wanted to know how Karen began working at Vision Staffing in the first place. “I’ve been with them for over seven years,” she told me. Back when we had the big crash I was in the unemployment line for a while. Just when I was about ready to accept a position elsewhere, Tiffany, one of the daughters who runs Vision Staffing, saw my resume.”

I was intrigued by Vision’s female ownership and asked Karen to elaborate. “A lot of staffing agencies are male owned and a mix of staff,” she said. “We have a mix of staff but it is a Certified Woman Owned Business and we are very proud of that”.

In my mind, working at a staffing agency meant you worked in a fast-paced environment with lots of different revolving opportunities. Karen confirmed my suspicion as she began to describe what an average day looks like. “Every hour brings something different,” she said nodding. “It might be an interview, or for me, something on the business development side, or a new order. Companies work with lots of different staffing agencies, so everyone is trying to find the diamond in the rough.”

As someone trying to find a position, it’s advantageous to go through a staffing agency because of their connections to many different types of businesses. A staffing agent can look at a resume and see the applicant may be better suited for a job than what they’re applying for. When applying to Vision Staffing, the process is easy. You can call Vision and talk to a recruiter or apply through their website. After you apply or speak with a recruiter, an interview is conducted in order to get to know your skill sets better and figure out some potential fits. It’s similar to how online dating works, except you have someone sitting directly across from you and they want you to succeed.

Times have changed, and hiring is no longer strictly about finding someone with job skills. Employers want to find someone who will fit with their culture, atmosphere, team and a whole lot more. When working with a staffing agency, you’ll see better results since you’re no longer a resume a stack on an HR rep’s desk. It really is about the personal human connection.

“It’s advantageous for a business to go through us as well,” Karen explained. “If they don’t have an HR department designed to take care of hiring, then we can take that piece off their desk. If they do, we still help offload the burden of advertising, pre-screening, setting up an interviews and such. Then, the company or business doesn’t have to go through thirty applicants. Time is money, so we save companies a lot of hassle. We can even help businesses go through the offer process and negotiate with the candidate. We do temp-to-hire and direct hire opportunities.”

I asked Karen if Vision Staffing does hiring for all kinds of positions, or if they just focus on certain pay brackets. “Anything,” she said while nodding. “From entry level, thirteen an hour to executive level, no pay caps.”

Karen also told me that while Vision Staffing does do temporary hiring on behalf companies, their real mission is to find applicants and businesses a fit which is permanent. “It’s fun because we’ve got people who were hired through us, moved onto management, and now hire through us,” she said smiling. “It’s full circle.”

The more I learned about Vision Staffing, the more their business practices and working with them sounded appealing. I got the sense Vision Staffing has both the employer and employee’s backs, and they’re a valuable resource. “As far as the main client goes, we’re looking to create a partnership.,” Karen continued. “If there’s info they need, we’ll go back to an employer and say, ‘You’re underpaying. You’re two dollars an hour under market and that’s why you’re having issues hiring, as well as letting them know where they are doing really well!”

The job market is always changing, and I found Karen’s wealth of knowledge fascinating, eager to hear about her observations. “The Twin Cities is tied for third in terms of highest employment rate for a city over a million in population,” she explained. “We have an unemployment rate of 3.2% and 5% is considered fully employed. Because there’s a lot of people working, we have to get creative in how we get candidates to apply.”

I secretly wondered if the job market had radically changed from when I was trying to find work a few years ago, and it seemed Karen knew what I was thinking. “The market we’re in now is a totally different market from where we were in 2013,” she said answering my question before I even got a chance to ask it. “People were taking positions far away from where they lived, but now the economy has gotten to the point where people are taking a pay cut if it means they can be closer to where they live.”

I told Karen that I’ve observed new neighborhoods built with the community aspect in mind, with shops, grocery stores, restaurants, business offices and living spaces built close to one another. Karen agreed with me, “I live in Crystal, and there’s a small downtown. There’s a lot of places that are right in that area. They continue to figure out how to make cities more livable.”

Our conversation began to drift off-topic as Karen and I eagerly discussed how living in the Twin Cities has changed in the passing years. “I’m from Marshall Minnesota, and growing up, Minneapolis City Center was the place to go,” she said with a sad smile. “When we’d go into the Twin Cities, that was the place to shop. I walked through there a few years ago, and everything was closed.”

I also expressed my disappointment at downtown Minneapolis’ changing landscape. I regaled my experience living in downtown Minneapolis for college, and that ten years ago my friends and I would go downtown for everything. Often, we’d walk the skyways, peaking in on the small shops before heading to Block E to play games at Gameworks, eat food and watch a movie at the downtown AMC. “There was a theater in downtown Minneapolis?” Karen asked me surprised. I nodded, then explained everything in Block E has since closed. “At least the Crystal Concourse is still open,” she affirmed.

It occurred to me that our conversation felt more like two friends talking over a cup of coffee, rather than an interview. But as much as I enjoyed our natural conversation, I still had a few things to ask Karen, and I didn’t want to miss out on what she would say.

I’d heard that Karen and Vision staffing go all out for their Christmas and Halloween parties, and I wanted the details.  “We at Vision try to have a fun atmosphere,” she said casually. “There’s always a prize, and usually it’s something as silly as a jean sticker. We don’t wear jeans except for Fridays, so if you don’t feel like dressing up, you can use a jean sticker.”

It was only when Karen began describing the competition and showing me pictures, I realized “all out” was an understatement. “The first Halloween competition I won was when four us decided to dress up as the Golden Girls, and we embellished it a little bit,” she said with a laugh. “I put a pillow over my butt under a huge skirt, and one of the girls put wrinkles on her skin and powered her face. It really brings everyone to together when you get your creative juices flowing. It makes work fun.” 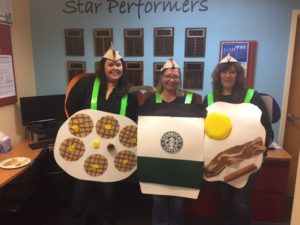 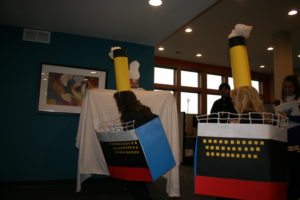 The competition at Vision Staffing for Christmas is among the different locations, and businesses who work with Vision Staffing send representatives to vote for their favorite decorations. “Last year was The 12 Days of Christmas” in Rogers, a Gingerbread House in Bloomington,  and Saint Nicolas Square (shopping strip mall) in Blaine. Two years ago in  Rogers, they had Santa’s sleigh hanging from the ceiling and I won with an Ice House.”

Karen pulled her phone out and began to show me her offices creations and my eyes widened at the details. She used wrapping paper to create a roof over her cubicle to keep with the theme. One person was the toy shop, another the candy stop. Karen showed me pictures from the time she did the ice house, which even had a construction paper fireplace inside which her son helped her make. “I’m competitive, if you couldn’t tell,” she said with a grin. “This year is a free-for-all for Halloween, and I’m already thinking of ideas.” I told Karen she had to send me pictures, because I had to know what she was going to do. “Oh, I will,” she said, her eyes twinkling. 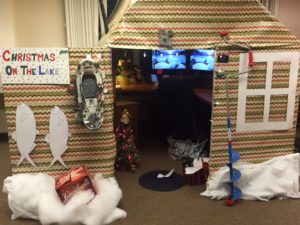 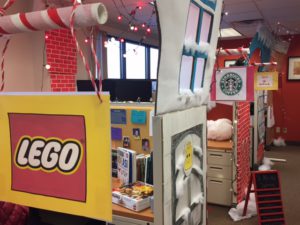 Karen and I continued to look at pictures from Halloween and Christmas, each picture seemingly more elaborate than the last. “We always say we’re number one in fun at our office, which is the same as the chamber so it matches,” she said with laugh.

In the blink of an eye, our time was up, and I began to reluctantly pack up my things. Talking with Karen was an absolute pleasure, and I’m sure many are eager to see what she cooks up for this year’s Halloween and Christmas competition. I know I am.