As I walked into the Caribou on 105th and 65 to meet Kat Smithe, I wondered if it would be difficult to find her since the coffee shop was bustling with a lot of people and the order line was backed up.

My fears were unfounded after I immediately spotted a woman with a dark blue Reebok athletic shirt with the words, “Blaine Festival” in bright white letters stitched into the chest. Inwardly smiling and somewhat relieved, I confidently stepped up to introduce myself. Kat gave me a smile before speaking into her phone, “Hey Mom, listen. I’ve got to go,” and quickly hung up.

Kat also had on a belt with a cell phone holder, dark shorts and tennis shoes. Her blonde bobbed hair which was cropped to her shoulders stood out against the navy shirt, and Kat’s dark rimmed glasses also seemed to perfectly suit her. In short, Kat looked like a woman on a mission and there was no doubt in my mind that she could run any event, including this summer’s Olympics if someone asked her.

After we settled into a table, Kat immediately apologized saying that she didn’t feel prepared. I assured her that most people don’t, but that she didn’t need to worry. And because I’m from Saint Paul and didn’t know much about the Blaine Festival, giving me an overview was the perfect place to start.

“The Blaine Festival has been around for 46 years,” Kat told me. “Currently it’s the last full weekend in June and has been that date for the last 15 years.”

Kat’s official title is “Marketing and Fundraising Director” which encompasses everything from graphic design to being the point person during the festival and of course spreading the word about everything the Blaine Festival has to offer. “I’m pretty much the trouble maker,” Kat said with a smirk. I laughed, then asked her to elaborate on what events happen during the festival itself.

“We’re at Aquatore Park, and I’ve added a bunch of things the past few years. We’ve got carnivals, dance groups, taekwondo demonstrations and even a magician. Kevin [the magician] has been coming for the past few years. This year,” she said excitedly, “he did ‘Coconut Kevin’s Beach Party’ on the Magician’s Stage. He has hula dancers and magic and it was a huge hit. It went over really well. He’s always working on a new magic trick for the festival.” In my mind’s eye I tried to imagine what “Coconut Kevin’s Beach Party” was like, and everything I could think of made me laugh. It sounded like a lot more fun than just a typical magic show. 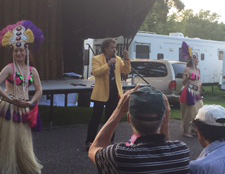 “What I strive for,” Kat said getting serious, “and what the committee strives for, is to make it as family-friendly as possible. We added a kid’s pedal tractor pull last year, we have the RAD (Reptile and Amphibian Discovery), and the ‘Not So Ugly Dog Contest’ sponsored by Advanced Veterinary Care in Blaine….” Kat stopped talking because I laughed, and I commented on how fantastic that was. She responded with a huge grin. “Yeah. They have different categories such as ‘ugliest’ dog, ‘prettiest dog,’ ‘best trick.’ It’s a blast.” Kat continued to list off all the events the Blaine Festival has, and I’m sure she watched my eyes get wider and wider. Bean bag tournaments, radio personalities, bands, and a petting zoo all made the list. “We did a karaoke contest for the first time last year. There were three categories; adults, youth and kids. Last year we were begging people to sing, but this year with all the promotions we tripled the number of participants,” Kat said proudly. “And I’ll tell ya what, some of those kids can really sing! Holy cow!”

I asked Kat what else she could tell me about the festival. Wiggling her eyebrows up and down she said, “Let’s see now. The festival is always free, there’s free parking — rain or shine. When it rains attendance is down, but we always have bands playing ‘under the big top’ as I like to call it. And of course, there’s the parade. We’ve got about 80 to 100 units in the parade. There’s a lot of local businesses, bands and of course,” Kat leaned in with a smirk, “this year, a lot of politicians.” 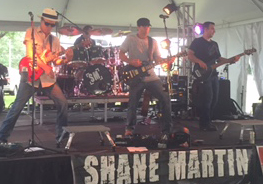 Shifting directions I asked Kat if she could tell me how she got involved with the planning committee. “The City of Blaine used to do partial funding for the festival, but in 2008 they said, ‘Here’s your last 5,000 dollars.’ A friend of mine had called me up and said, ‘You’re really good at fundraising, you need to do this,’ so I did. And once I lost my job at the credit union I told my husband we should go to the MetroNorth Chamber meetings since the Blaine Festival Volunteer Committee has been a member for years.” Kat was eager to tell me just how monumental the chamber has been in supporting the festival. In 2014 no one had really known about the festival so there were only 20ish sponsors. But in 2016 that number had risen to 96. I also learned that lots of chamber members participate in addition to sponsoring.

The way people rally to community events in Anoka County is a theme that continually pops up among business owners in the MetroNorth Chamber, and it’s a wonderful thing to witness. When a community is strong and is supported by local business, it thrives. The festival, while it’s fun, means more than just people being entertained. It’s a testament to people’s desire to make their community something special.

Kat said, “We estimate about 25,000 come to the festival each year. It’s hard because we don’t charge admission, so we count the parking spaces taken up and multiply that by 2.5 to get the number.” I asked her if she could tell me how many different events there are. “Geeze the president just asked me that last night!” she said taking out her phone. “Okay, I’m cheating on this one. See, I wasn’t prepared!” I assured her it was no problem and patiently waited for her to look up the numbers. “I count 14 just for Friday night. Hmm…Okay. Not counting the people who do something more than once, I’d say 50 is a good way to put it,” she said closing her phone. I nodded understanding her meaning. The carnival could be considered a single event even though there’s a ferris wheel, bumper cars, et cetera, at the carnival.

That’s a lot, and since Kat is one of the primary organizers I asked her if she works full time. “Well I don’t get paid, none of us do, but I’d say the three months closer to the festival I put in about 40 hours a week. Right now it’s 10 to 20 hours a week and because I’m my own boss I do it when the mood strikes me.”

I love hearing what people’s goals are for the future, and unsurprisingly, Kat told me hers is to keep adding new events to the festival. “We have a whole bunch of open grass. Last year I added carpet bowling and this year I added the Kids Building Project from Home Depot. I want to fill that whole area up with kid’s stuff.” I asked Kat how close they are to filling up every available space. She grinned at me and said, “I’m approaching that, but I’m not intimidated by it. One has to be creative. Parking is an issue. There are other events at Aquatore Park the festival that weekend, but we’re meeting about how we can improve it. The other thing is I’m always looking for businesses and/or organizations to do demonstrations or performances.”

Kat’s enthusiasm for the festival is palpable. I made a comment that it didn’t seem like she would be stopping anytime soon. “Yeah no,” she quickly replied.

Since it is obvious how many moving pieces there are, I asked Kat to take me through what her day looks like during the festival. “I usually get there between 6:30 and 7:30 in the morning. There’s a lot of setup involved. Because I’m the instigator, I like to make sure things get set up when they’re supposed to. I’m kind of anal about it. I am not, however, the only committee person who’s here for long days – it takes a lot of us to make this work.  To the public,  it needs to look like a well-oiled machine even if there’re hiccups. Majestic Oaks has been gracious and have lent us golf carts. I go around from event to event making sure things are running smoothly. Behind the scenes last year we had some minor hiccups with the karaoke contests so I chose to take that one on personally. It ran smoothly. Hunky dory.”

Kat told me the festival doesn’t close until midnight so she and some of the other committee members are usually there until one or two in the morning helping things get wrapped up. I gasped at that statement. While I assumed she was there late, I never imagined she was there that late. “Yeah, it’s three very long days and that doesn’t count all the setup the Tuesday through Thursday before the event.”

With so many events to choose from, I asked Kat if there was one event that was her favorite. She leaned back and looked up as she thought. “Hmmm. I don’t know!” she finally said. “I really really enjoy the planning part of it. Getting new events, new sponsors. I think for me, the best part is my Facebook blowing up with people telling me how wonderful the festival is.”

The hour had passed by quickly, and before long I found myself packing up my computer. Kat and I didn’t say goodbye right away, though. We continued to talk for another 30 minutes before leaving Caribou, swapping house remodeling project stories.

If you’re interested in learning more about all the fun at the Blaine Festival, please feel free to visit their website at blainefestival.org or contact Kat directly at ksmithe@comcast.net.