Meeting up at the Caribou on University and 694, Jon Nalty gave me a firm handshake and a warm smile before we sat down at our table. Jon made himself really easy to spot by wearing his name tag which also had the Keller Williams logo on it. I had gotten myself some coffee and was ready to dive in.

Ever since my husband and I bought our home, the housing market has always been an interesting topic, and I was curious to hear how things were changing since we had bought four years prior.

It didn’t take long for me to realize that Jon absolutely loves what he does for a living, and his knowledge, instincts and friendly demeanor make him a perfect person for the job. Since many realtors get into the business by knowing someone in real estate, I asked Jon if that was the case. “I started reading an investing book back in 2003-2004 and bought my first property in Florida,” Jon said completely surprising me. “I thought, ‘This is kind of fun. I believe in this so I should try and help other people do it,’ and so in ’05 I got my license. I really do believe it’s the best investment, and it’s the only investment you can improve.”

When I furrowed my eyebrows, Jon must have known I wasn’t quite sure what he meant. “You can improve your home to make it a better investment,” he said as understanding dawned me. “You can remodel, upgrade, paint and all that will add value to your house.”

After completing a six-year commitment with the Air Force, Jon became an officer and headed to Florida (where he met his wife) to begin flight training. However, he was unable to complete the training due to an injury. Bringing his wife back to Minnesota, Jon got a job at US West phone company (now Century Link) and sold real estate on the side.

I asked Jon if it was difficult to find clients when he was doing real estate only part time. He shook his head. “No, because I was only selling about six houses a year, and most of those came through referrals from people at US West. That’s how I still do all my business,” he added with a smile. “You know those billboards across town with agents’ information on them?” I nodded. “That’s not how I do things. I’d much rather do business through referral. The whole idea is to be ‘top of mind,’ so I do give people this calendar,” he said taking out a Twins Baseball game schedule. “I should probably update my mug shot,” he said looking at before passing it over to me.

Once Jon’s job with Century Link came to an end in 2014, he decided to make selling houses his full-time job. “It felt really natural to move into real estate. It’s a relationship business. Making relationships, maintaining relationships, so as far as making connections go, that’s a strength of mine. I’d probably be a good Walmart greeter,” he added.

An image of Jon standing at the door of Walmart saying hello flashed through my mind, and it took me a moment before I could move on to my next question. When I did, I asked Jon if he sold a lot of homes where he lives in the Twin Cities. “It’s kind of funny how that works out. I’ve lived in Blaine for 13 years, and I’d love to sell in Blaine (sometimes I do), but I’ll get a call from someone who wants to sell a house in Lakeville, so I will. Very rarely will I turn down people, and if I can’t make it work I’ll give a referral. Ideally, I’d like to be a big fish in a small pond. What I’ve been doing for seven to eight years in my neighborhood is ‘reverse trick-or-treating’ where I will go around giving out candy with my flyer in there. I usually put something like ‘Let your real estate experience be a treat, not a frightening trick,’” Jon said with a laugh.

I told Jon my husband and I bought in 2011 and the market was just starting to take off and asked him if things had calmed down at all. “It’s getting crazier,” he said to my surprise. “There is such a low supply of homes. Ideally, you want six months of supply, but right now there’s only a one month supply,” he said. “I had a couple looking for a home in Blaine under 225 thousand. Normally there would be 30 to 40 homes for sale at that price point. Right now, there’s only four.”

Jon and I also talked about whether the market was a “buyers” market or a “sellers” market. It was interesting to get his perspective on it. While the market is definitely in favor to those who are sellers, it’s a great time to buy because the interest rates are so low. However, the market is very competitive.  “In the last year and a half most of the homes I’ve listed sold on the first day,” Jon said. “For first-time buyers I would recommend a townhome so things aren’t so crazy. Either that or buy further out. Ramsey, Elk River, Big Lake and East Bethel are totally different markets. But you can get some pretty good deals on condos and townhomes and you have some more time to think about things.”

I nodded, thinking back to my own experience buying a house. We had seen our home before it had a chance to be listed, and by the end of the day, there were already four offers on the house. We had to think very quickly, and it was nerve wracking. When I told Jon this, he nodded. “I had one house which had forty showings. It wasn’t even an open house. It was just back to back showings all day. I even had a friend of mine from the TV station come down and set up a camera so they could record all the people going in and out. It didn’t make the news, but it’s still unbelievable. I should ask him for the tape.”

“You need to get into the psychology with people,” Jon said continuing. “When I’m working with a seller, we have to price the house right the first time. If you price it too high, you’re likely to get a get a terrible disease called no showings. Buyers are savvy these days and are looking for value. Say a house is worth 290 to 310k. If you try to price it at 315k, you’re going to price yourself out of the market. The market determines the price and all we do as agents is interpret it. As far as buyers go, you have to prepare them mentally not to get too attached to a certain house.“

Jon’s desire to help others with their housing needs comes from his genuinely friendly demeanor. “I believe we’re in the business of blessing others,” he said. “How can I find buyers? How can I find sellers? Basically, I’m looking at, how can I help other people? When people feel taken care of, good things come. You can’t fake it though,” he said with a soft smile.

I nodded and took a moment to digest what Jon and I had just talked through. Sensing my silence Jon laughed. “Did Angie tell you I can talk your ear off?”**  I laughed also and explained I was just thinking about the implications of what he’d said. Nodding, Jon asked me if I had any other questions.

I did have several, but they didn’t have to do with the housing market. They had to do with him and his family. Earlier in our conversation, Jon had mentioned he had four children, but I wanted to know a bit more about them. He beamed.

“My oldest, Luke, is 17 and he is a senior. He wants to get into ministry and help others. He works at McDonald’s and if people are down he’ll walk over to them, offer a meal card and talk to them. Kevin is 15 and is really into photography. Joey is 13 and we thought we were done, but then we had Katie. She’s 11.” 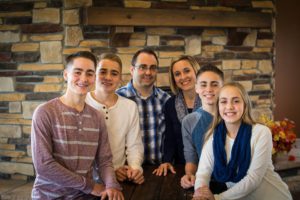 “The boys play hockey and I coach them all. I grew up playing hockey and it was never balanced.” I nodded, because I knew exactly what he was talking about. “My boys play in the Minnesota Hockey Recreation League and a lot of the pressure is off. Nothing Sunday morning, nothing Wednesday and only two events per week, rather than five to six like most leagues.” You know, growing up I wanted a hockey rink in my backyard, and the house we live in has a rink about 100 feet away. But the city of takes care of it for me.”

I grinned, and told Jon that sounded like the best of both worlds. “It is,” he grinned in return. John’s love of hockey doesn’t end with coaching his boys. To this day he plays as a forward with the Minnesota Warriors, a team for disabled veterans.

“We’re also heavily involved in church stuff and we love to travel. We go on a couple of trips a year.”

As our conversation began to wrap up, I reflected once again on everything I had learned. Jon was an extroverted, caring person who believed in working hard but also balancing that with the family. Like many in the MetroNorth Chamber, he is able to work, doing what he loves and that frees him up for what he finds most important. We continued to talk until Jon needed to leave and go to his next appointment.

**Angie here.  I neglected to mention that.  *smile*