John Smithe and I talk over coffee about what it was like working for the railroad, his promotional group business, and growing up as a “river rat.”

It was a blustery fall afternoon the day I met up with John Smithe at Panera. Snow had fallen earlier, and I pulled my jacket just a bit tighter to chase the chill. Even if the weather was less than ideal, nothing could dampen my excitement to meet John Smithe. In the first year of this blog’s publication, I had the good fortune of interviewing his wife, Kat Smithe, for our spotlight. Knowing her made me look forward to meeting John all the more. 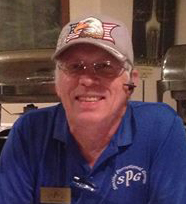 Thanks to a logoed shirt and bright American Eagle cap, I found John easily. We both decided on a cup of coffee and moved to a small round table near Panera’s floor-to-ceiling windows. I knew John had worked for the Soo Line/Canadian Pacific railroad and asked him to tell me what he did for them. “I ran the employee store turning it into a profitable business,” he began, “And was president of the employee’s club for about 20 years. I was in charge of seeing that the company picnics and Christmas parties were taken care of.  I also got involved with the Metro Paint-a-thon where I was a team leader for 17 years. We painted 28 homes in 28 years,” he finished proudly.

The paint-a-thon was a volunteer service day where employees of the railroad would volunteer to paint the homes of senior citizens who could not afford the cost. The paint-a-thon also covered small jobs like landscaping. For seniors, their home is a source of pride and having someone do maintenance meant they could stay longer. John even maintained a relationship with one elderly lady, Milly, which he’d seen just prior to our meeting. “Kat calls her my girlfriend,” he laughed. John told me Milly is 94 years old and makes a great cherry pie, which is his favorite.

“I was in the accounting department at the railroad,” John explained. “I moved around some, but I did the same job for the last 11 years until I retired. The guy who came after me wanted my job because he said it looked easy. Well, of course it looked easy,” he laughed again. “It was easy because I’d been doing it for so long.”

I asked if his current business was something he always dreamed of doing, or if he took a roundabout way of getting to where he is. John looked at me thoughtfully. “I always wanted to be a forester. I was a river rat and always felt more comfortable out in nature than I did anywhere else. But to be a forester I’d have to go out to Seattle, WA and there wasn’t money for that. I ended up in airline trucking and traffic management school and took a job with the railroad shortly after.”

The term “river rat” grabbed my attention, and I asked John if he could explain. With a look of nostalgia, he began to paint me a picture. “We lived right on the river,” he started. “My dad was in construction and helped build things like spillways, lakes, and bridges. He didn’t want to be away from us so we all moved into an eight foot by fifty-five foot mobile home. There was…” he paused to count up the number of people on his fingers, “ten of us and it was basically a two-bedroom trailer. Each of us got one drawer that was probably twelve by twelve and eight inches deep,” he said using his arms to approximate size. In total, John has 13 brothers and sisters, but while he was growing up, there was usually ten people living together at any given time.

“Big thing for us kids,” he continued, “Boys would get a new shirt, new pair of jeans, and a new pair of tennis shoes every year. When summer came, the tennis shoes were your summer shoes. We learned that if you wanted something, you had to get it yourself.”

John gave me a couple of examples. If they wanted a snow cone that cost 5 cents each for all the kids living at home, they’d go collect bottles for recycling. Hickory nuts could be collected and sold. They could also pull weeds for a farm. The pay? A dime per row of crops, with each row being a mile long. John grinned at me. “Best part was, you’d work those all day and then later if you drove by, you’d see one you missed. And dad would say, ‘Go get that one! You missed it!’”

We laughed, and, John’s childhood stories had me hooked. I wanted to know, did he do any other odd jobs? “I became a grease monkey at the age of fourteen,” he said without having to think about it. “My dad decided I needed the job. He was helping to build the lake in Highland, Illinois, and my job was to stack the cinder blocks for the next day after everyone went home.”

Stacking cinder blocks is not for the faint of heart. After a whole evening of stacking by hand, John discovered he’d put the blocks in the wrong place and had to move them to a different location. “My mom yelled at my dad because my hands were all cut up,” he said holding out his palms. “I told my dad to teach me how to run a forklift. I learned that slow is the best way to do it,” he laughed. When he was told to move the pile yet again, John realized he’d been the subject of a prank.

John’s family also kept a variety of various animals. There was a hog so large his youngest brother could ride it, a goat named Annie, pheasants, a cow named George, groundhogs, and even a pet skunk named Suzie. I learned Suzie came into the family after John’s father saw a skunk and shot it, only to discover it had babies. The Smithe’s took them in, fixed them and raised them. “When I came up here for school I brought Suzie with me,” John said with a smile. “Skunks are cleaner than cats, and they’re smart. Suzie loved music and the more vibrations the better. She used to run back and forth on my car dash when the music was going.”

Suzie was quite the entertainment at parties when John was in school. She used to hide under the couch, and people would scatter when she would come out and raise her tail. “Not that she could spray, of course,” John said, his eye twinkling. He stopped, and his face became somber. “One day she was at home with my parents and another skunk called for her. She was adamant about leaving so my parents let her go. Never saw her again.” The thought saddened both of us, but before we could get too down, John was ready with another story. “But, we had rabbits and had hogs that drank beer,” he said with a smile.

The Smithe’s even had geese, and John recounted bringing down a new female after their male goose’s mate had died. “They mate for life,” he explained, “And he was really sad so Dad said we had to get a new spouse for him. When I brought her down, he knew she was there. He was preening his feathers and getting ready. When she saw him, she grabbed him by the neck and shook him. It was like she was telling him who was boss.”

John’s love of forestry stemmed from the different fossils his dad would bring home from the different construction sites he worked on. “I always thought, ‘forestry is really cool,’” he said coming full circle. “My ideal home would be up on a lake in the woods somewhere up in northern Minnesota. My wife, not so much.” 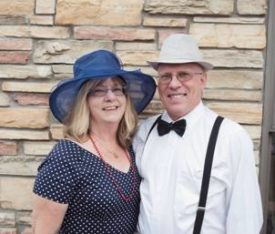 At the mention of Kat I smiled, and John seemed to understand what I wanted to know without me asking. “I met Kat through one of the girls at the employee’s club,” he said. “Kat was looking for trinkets, and it took two years before she’d finally go out with me. Finally, I had a company picnic and she showed up. We just clicked, and things worked out.” I told him pursuing Kat for two years was amazing persistence, but it didn’t seem like a big deal for him. “We’d both been single for a long time, and this would be the third marriage for both us,” John said. “We’re good at what we do. I do the promotional business and she does the graphic design.”

I asked John to tell me a bit more about his business, and he explained he was buying through some manufacturers and they encouraged him to start it up. “I hate buying retail for anything,” John said. “I can get just about anything you want. I can also do a theme. If you say sports or Halloween, I can make that happen. I can do business cards and can do just about any type of clothing. I get painters pants for my nephew and they’re half the price of what he used to pay. I can do stuff for weddings, golf things, just about anything.”

John’s sincerity and business ethics are two good reasons to work with him. His experience in turning the employee store at Soo Line into a success means he can pass practical advice to business owners looking for promotional products. “I try to steer them,” John said. “I’ve told people to pick three products and do those well. Then, down the road we can add more. I also send business to others. I could do signs, but that’s not really my area of expertise, so I’ll point clients elsewhere.”

We continued to chat long after our time had run up. As I packed up my things and left Panera behind, I reflected on just how fortunate I am to meet the people I meet. I thought about how I’d never imagine anyone’s life could be straight out of a Mark Twain novel, and how it’s people like John, with his personal work standard, high ethics and knack for business, that make the chamber such a special group. 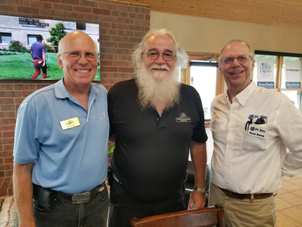