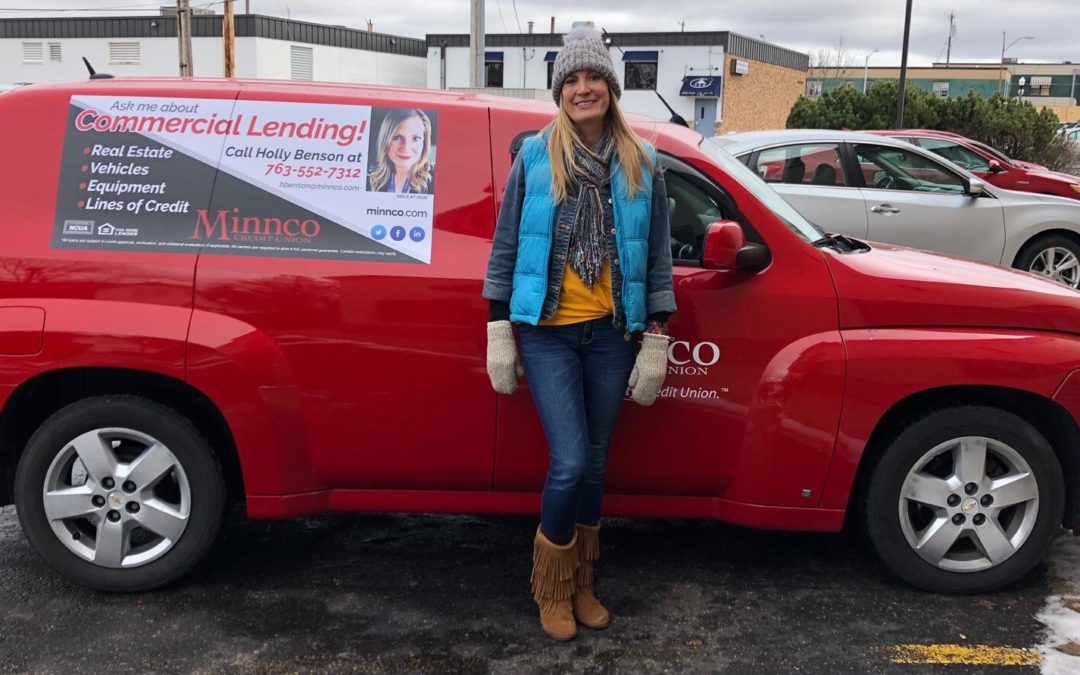 Holly Benson and I talk about the wonders of archaeology, her love for the Minnesota Vikings, and the personal side of being a commercial loan officer.

Holly Benson and I met up at the counter of a Caribou not too far off from the Minnco Credit Union where she calls home. As soon as I walked up to the counter Holly introduced herself with a wide smile and gentle voice, and I knew we would connect. Her blonde hair was pushed back by the aviators that sat atop her head and they seemed to perfectly complement her leather jacket stitched with roses.  Her purse was Vikings themed. After exchanging pleasantries, we picked a table and sat down.

Like others in the chamber, Holly’s path to her current job was a fascinating, winding road.  “I graduated from college with a degree in archaeology,” Holly said with a laugh. “That’s obviously the path to banking, right? So, like most people, I needed a job. My mother-in-law was the vice president of an insurance company and had a colleague in the banking industry that was hiring. It was in the call center at Marquette Bank, which doesn’t exist anymore. Base level pay, but as I started doing my job I thought, ‘Huh. I kind of like this.”

Holly has always been a person who enjoys building relationships, so for her, it was important that she get off the phone and begin meeting people face to face. That was when she moved over to a local branch. “I got into new memberships, then consumer lending, then business lending and I thought, ‘Hmmm…I really think I like business loans.”

Unlike personal loans where a person meets with a loan officer once on many occasions, business loans have the potential for long-term relationships. “There’re so many different types that walk through my door,” Holly said with an obvious gleam in her eyes. “I love reading business plans and being a part of their story and helping them grow. So long story short, here I am, 20 years later.”

I asked Holly to walk me through what might happen on a typical day. She sat back thoughtfully. “Have you ever seen Shark Tank?” I nodded. “That’s one of the few TV shows I watch. It’s like the sexy Hollywood version of what I do,” she explained with a laugh. “I do market research and analyze industry trends. My typical day is never the same, and I’m a department of one, so I do everything along with some support from a third party vendor credit union service organization.”

“Everything” includes meeting with the business owner, underwriting, closing, and servicing the loan. Holly also enjoys being an active member of the chamber. “I really feel like it’s a door to meet new businesses,” she said. “I’ve made so many wonderful friends. They’re beyond business contacts.”

I asked Holly why she liked working at a credit union as opposed to a bank. “There are some great banks out there,” she said with a firm nod. “Community banks and credit unions have a lot in common because it’s more about the person. Credit unions differ because we are not-for-profit. You have a voice and a vote,” she explained. “Our board of directors is all volunteers, and we offer lower loan rates and higher deposit rates. I’m a member and partial owner of this wonderful place I get to call home every day.”

I sipped my coffee and looked at Holly thoughtfully. I knew she loved her job intensely and wouldn’t trade it for the world, but I was also curious about her archaeology background. Was she still interested in it? “Archaeology is my passion,” she confirmed. “It’s my hobby. I went into college not knowing what I wanted to do, and then I took archaeology 101. I’ve always loved vintage, old, and all things dusty and musty. My major is in anthropology with a focus in archaeology.”

Anthropology is the study of human behavior as it applies to groups and culture, and I could instantly see how her studies played into being a commercial loan officer. The archaeology side of her degree is what forms her hobbies. “I still get my National Geographic magazines,” she said with a wide smile. “If I’m scrolling through headlines and I see one that says ‘old bones discovered’ or ‘Viking ship found’ I’ll click. I may not be completely up to date on politics, but I know what bones have been found!” she laughed.

Holly pulled out her hand to show me a bracelet made from old American coins. For her, it’s a way to stay connected to her hobby even during the day. I asked if there was a recent archaeological find that was especially intriguing. “There was a ship they found in the Black Sea,” she said without having to think of an answer. “And it’s, oh, maybe two thousand years old? But you can see the wood planks where the people sat. The mast is still there, and the wine casks are still there. The archaeologists aren’t going to raise the boat because that would ruin it but, you can really feel the human connection. I’m obsessed with that one.”

We had a good discussion about the boat before my eyes wandered to her Vikings purse, and I asked if she could tell me about her fandom. “Vikings love comes from my dad,” she said glancing at her purse. “My dad had season tickets and I grew up tailgating. I had to be a Vikings fan from day one. When I was in college I tried out for the Vikings cheerleading team and I made it to the final cut.”

I stopped Holly and asked her to tell me more. She smiled. “I cheered in high school and college. There were multiple rounds with the Vikings at Winter Park their former practice facility, and each round they’d cut the number in half, and then in half again. I paid for this elaborate purple and white sparkly gold costume. What they asked us to do got progressively harder and then in the final round, I got knocked out. Oh well.”

Still, I found Holly making it to the final round impressive since it’s not an experience many people have. “I had Glamour Shots done for it and as you know, back in the day Glamour Shots were big time,” she said raising her eyebrows. “I still have my costume. It gives me a lot of nostalgia! Dusty and musty, see! What is it with me?” she laughed.

I asked if she still goes to games. “We don’t go to as many games as we used to, they’re just so darn expensive. But, we have a Vikings bar downstairs at home with memorabilia. Signatures, a drinking horn, banners, etc. I did go to the opening game this year and brought my dad. I was there at TCF Bank Stadium for the coldest recorded game in team history at minus six degrees with a twenty-five degree below zero windchill. We even got a certificate for being there.”

Holly also witnessed the infamous missed kick in 1998. “They [the Vikings] just take your heart and stomp on it sometimes. But I’m right there next year,” she said.

We both sipped on our coffee, and I decided to switch gears and ask her more questions about being a commercial loan officer. She mentioned watching industry trends earlier, and I wanted to know what changes she’s witnessed. Holly cocked her head to the side as she thought. “I think it’s taking the personal face-to-face out of the picture,” she began. “These days, a lot of business owners prefer to work via email and don’t want to come to a brick and mortar. I try to figure out which type of client they’ll be because some still do, but that’s the evolving situation.”

I was honestly puzzled and surprised by this trend since meeting face-to-face seemed like an easier way to get a loan. I asked Holly if this was true. “When you come in — even if it’s “no”  — it might just be, ‘It’s a no right now,’” she explained. “I try hard to point them to resources and work with them to build a relationship so we can get to a “yes” someday. But if you do a loan online, sometimes it just says, ‘Sorry you’re denied.’ When you come in, I can work with you.”

Holly’s personability and her being a department of one means a business owner gets to work with the same person throughout their loan. She told me that clients stop by to shoot the breeze, and that’s one of her favorite parts of being a commercial loan officer. She even had the privilege of working with the owner of the famous Pronto Pups at the State Fair to help him secure a permanent building on the State Fairgrounds. “It was so fun to be part of such a Minnesota tradition. I look at it and think, ‘I did that!’ It’s obviously Gregg’s baby, but it felt like my baby too!” she laughed. “Proud mama of the Pronto Pup building.”

The clock was beginning to wind down, but I needed to ask Holly a final question. I knew there was wisdom in the kindness of her blue eyes, and I asked what business advice she’d want to pass on. “Be your biggest fan,” she said. “We say terrible things to ourselves, and you have to shut that out and say nice things to yourself. Support yourself and surround yourself with people who will help you get where you want to be.”

I nodded, and asked Holly if that was a lesson she had to learn herself. “Psychology is confusing,” she affirmed. “My brother and sister both passed away when I was a kid. Growing up I put a lot of pressure on myself. I thought, ‘I’m here. I’ve got to rock this. I’ve got to be the best mom, wife, friend, etc. I’m the lucky one because I’m here. I’m a perfectionist to a fault and I needed someone to tell me that it’s okay to not be perfect. I’m doing great. It changed my life and I’m grateful. I think everything happens for a reason. We don’t have to understand, but I don’t know who I’d be if I hadn’t gone through the struggles I did.”

Holly’s words struck a chord with me, and as we packed up and said our goodbyes, I thought about how important it is to have people who root for us. It’s because of people like Holly that our communities and businesses are strong, and like so many others, I found myself thankful to have met her.