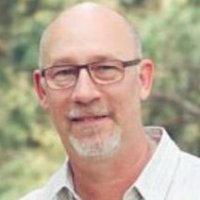 I met Dick Fisher at the Panera in Roseville, and since the day was perfectly sunny and on the cooler end, we decided to relocate to the outside patio. Settling in with our coffee, Dick and I began talking about what every good Minnesotan talks about; the weather. And since we are very good Minnesotans meeting in August, we talked about the State Fair. Would the weather be hot for the Fair? Or, would it remain cool for this year’s festivities?

After talking about the important things, Dick and I decided to redirect our conversation. I was very curious to hear how he ended up in social media. “It was a very squiggly road,” he said as he drew a chaotic line in the air with his finger. “I certainly didn’t see myself ending up in this type of business.” I nodded, then asked Dick to tell me where he got his start. “I started in the IT industry back in the 80s primarily because I passed a typing test. Unlike a lot of IT types, I didn’t bounce from job to job. I started working in a bank in St. Paul and eventually I was recruited by the company in Atlanta that provided the bank’s computer and software to come work for them.”

Dick’s employment history has a long string of being recruited into different positions, which included working at a company out of Omaha that sold software. “I loved that job,” Dick said wistfully. “It was my favorite job. I would do presentations to C level executives and the guys with the pocket protectors at the same time. Then 9/11 happened and that following March, my division at the company had to be shut down. The economy went down, and no one was buying technology. I was without a job, never had a resume and never interviewed. It was always, ‘Come work for me,’” Dick said.

Dick’s employment story really interested me. Up until this point, I hadn’t met anyone who was recruited from job to job like he was. In order to be noticed by so many different types of employers, you’d have to be sharp, smart, have a good head on your shoulders for business and personable. It was obvious to me Dick was all these things. As our conversation continued, I appreciated the ease with which he told me his story.

A loud bang reverberated from the mall construction causing us to glance at the scaffolding over the mall’s entrance. “Hey!” Dick said. “We’re talking here!” I chuckled as Dick shook his head before continuing. “I knew my wife and I had to do something,” he said referring to his joblessness, “so we invested in a franchise. However, the parent company was shut down by the IRS. We lost everything. Every dime.”

Dick explained that after he lost the franchise, he got connected to a nonprofit that worked with people in financial crisis, something he understood all too well. “During the mortgage crisis, there were thirteen credit counseling agencies of us answering a hotline twenty-four hours a day, seven days a week. We were getting about eighty thousand calls month.”

After the mortgage crisis leveled out, the nonprofit Dick was a part of lost its government funding. As a result, it merged with a different nonprofit out of New Jersey. “I stayed on for a year helping them with their social media marketing. Back then, it was just starting to poke its nose out of the internet.”

Dick was eventually laid off from that job as well, and like a couple times before, found himself jobless. “I don’t know how to explain this,” he began slowly, “but after I packed up my stuff and left, I went directly to the unemployment office. But as I was driving, I went to the wrong office. I went to the one in Ramsey County. I didn’t live in Ramsey County.”

Curious, I leaned in, wondering what Dick would say next. Why was it hard to explain? “And as I was filling out the paperwork,” he continued, “The girl started asking me questions. ‘Have you ever wanted to own your own business? Are you over fifty?’ I thought to myself, ‘You’re getting a little personal there sweetheart.’” I laughed, causing Dick to smirk.  “She directed me to fill out some paperwork for a program in Minnesota which takes people who are unemployed, over a certain age and allows them to attend classes at Saint Thomas, get a mini MBA and then gives grant money to start a business. Way too weird to be true.”

I gawked, then repeated the information back to Dick. He just happened to go to the wrong unemployment office on this particular day to find out about this particular program? I tried to formulate a way to explain it. “…Divine intervention stuff?” Dick offered. I nodded. “Yeah. Pretty weird.”

When Dick said he took a very squiggly road to get here, he wasn’t kidding! I thought.

“My resume looked like it got shot with birdshot,” he said, “But I had already started the thought process that social media marketing was something I was going to take a swing at. One of the things I have a knack for is helping people solve their technology problems, and I wasn’t going to be the guy that talks over their heads.”

In the eight years Dick has been in social media marketing, a lot has changed. We talked about how people used to scoff at the idea of social media marketing, and now it’s understood as important. “These are platforms where people can have intelligent or unintelligent conversations.” I grinned at Dick in understanding. “That’s where social advertising comes in. This is why Facebook is worth thirty-two gabillion dollars. They’ve figured out how to capture all of the intelligent data that’s taking place on their network.”

“There’s a lot of people who say, ‘I don’t want to get involved in that crap’,” Dick continued, “But they understand it. It’s become ingrained in our culture. Ten years ago, if you were watching the news you’d see ‘NBC.com’ at the bottom of the screen. Now it’s the little birdie and the little ‘F’. You don’t see web addresses anymore.”

That one comment from Dick put social media into perspective for me. Ten years ago, it was all about getting people to explore websites on this phenomenon known as the internet. But now, it’s all about conversations and opinions.

“A business needs the ability to tap into that marketing collateral,” Dick said. “It’s a cultural thing. We just can’t seem to figure out how to not look at a picture. In the olden days—I love saying that!” he interjected, “It was Twitter. Now it’s Snap Chat. You want to see something appealing because you’ve got so much stuff coming at you.”

I commented that social media is always changing, causing Dick to look at his watch. “It just did!” he exclaimed. I said to Dick that social media is extremely difficult to keep up with as a business owner. “You can’t do online marketing as a solopreneur or if you have a small staff,” Dick said. “Things are always changing on the internet, and even changing daily. So how can you expect someone to allocate brain cells to that? Social media marketing is a lot more analytical than you think. There’s a lot of data to interpret, but you also have to understand people too.”

I told Dick perhaps this is the reason so many people are terrible at it. You really need two seemingly opposite skill sets. He agreed with me, and it made me think back to Dick’s early career and constantly being recruited. His personality and skills are perfect for his job.

I asked Dick to tell me what plans he has for his business in the future. “That’s a really good question,” he said pausing to think about it. “Back in business class…it’s almost like you’re in detention. You know, you’re all sitting down at these tables and they’re asking you these questions. The instructor comes out and the very first thing he said was, ‘Take out a piece of paper and in one sentence, tell me how you would like to dispose of your business.’ I thought, ‘Can I get a paycheck first?’”

Dick explained the reason for the instructor’s question. How you want to end your business dictates how you run your business. “I want to build a sellable asset,” Dick said, “And eventually retire.”

Earlier in our conversation Dick mentioned Arizona, so I asked him if that was in his plans. He smiled wistfully and began to explain his first experience with Arizona. Back when he was working for that company in Omaha, they had a large client out in Phoenix. When he arrived there for a check-in, he discovered there was a crisis in the IT department and the meeting would have to be postponed. To compensate, his contact sent him up to Sedona, Arizona where his sister ran a hotel.

“My car rental company always got me a red Mustang convertible,” Dick said with a smile. “And so here I am, driving through northern Arizona five miles from the exit to the first town. I come around the corner to see these picturesque, panoramic, red rock formations and I literally couldn’t drive. I had to pull off the side of the road. And so I’m standing there looking at all of it, and it’s like a come-to-life coloring book. I knew I had to bring my wife. So we started going there for vacation, then ten days, then a couple times a year…then we stayed for a month. This year, we’re thinking two months.”

As I listened to Dick’s love for Arizona, I couldn’t help but smile and be reminded once again at how business is fuel for the important things. Dick and I had come to the end of our conversation, but I truly felt grateful for having spent time with him and that I was able to learn something new.