I sit down with Chris and chat about time management, business practices, and what he likes to do with his free time.

Driving up to Sandy’s Auto Service conveniently located on Coon Rapids Boulevard, I did my best to navigate my tiny sedan through the piles of snow as I made my way to the parking lot. Inside, Abby, who was on the phone, greeted me with a smile and pointed me to toward the door where Chris was. We shook hands, and I followed him to a pair of chairs and a table located at the back of the shop. 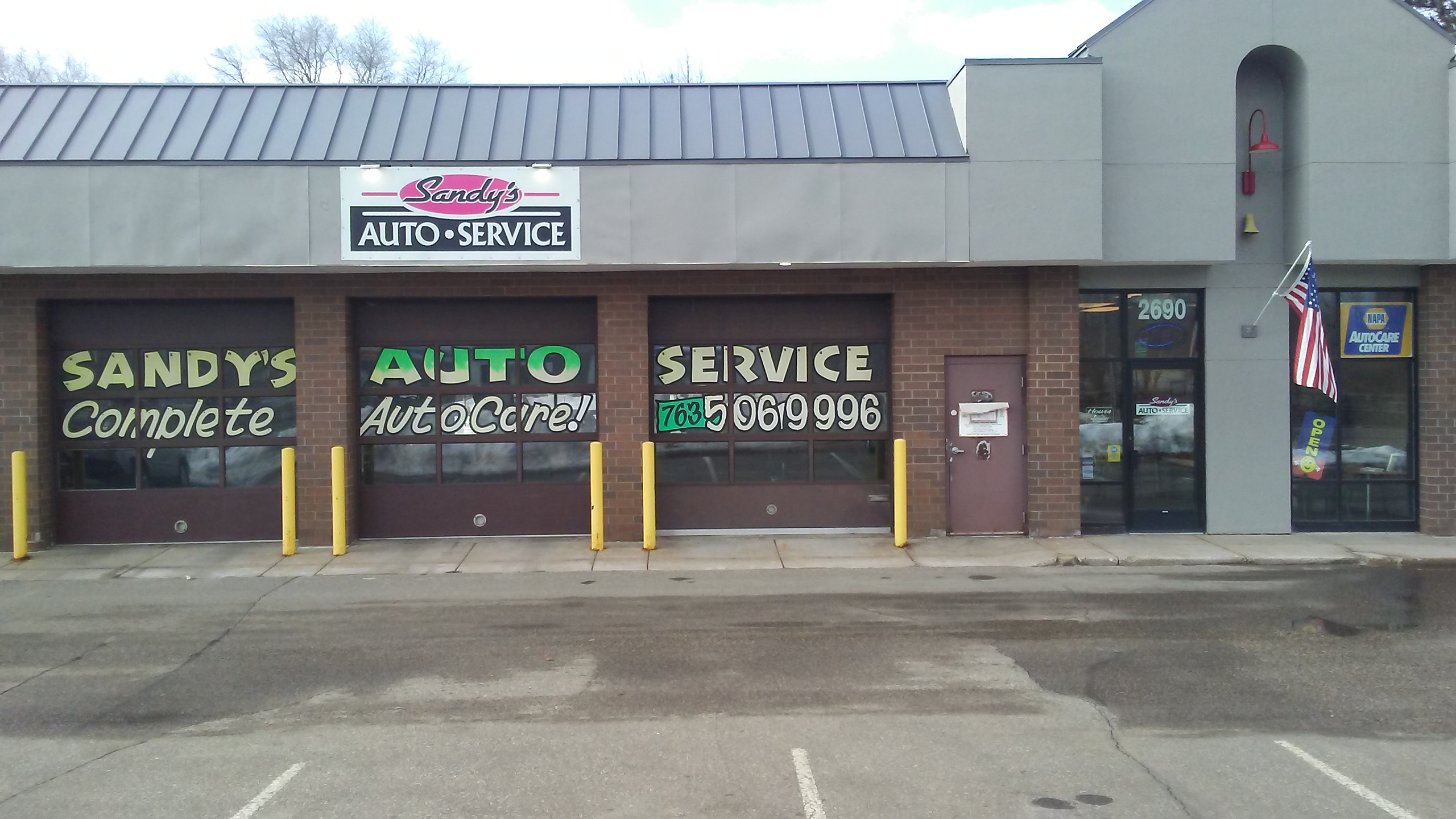 The difference between Sandy’s and your average car garage was immediately noticeable. The shop was clean and had no discernible odors. Every tool and piece of equipment was organized with plenty of space to move around. The fluids were neatly arranged into rows and categorized. When I commented on the cleanliness of the shop, Chris told me, “A shop should be as clean as a doctor’s office. It could stand to be cleaner around here,” he frowned, “But I’m getting there.”

I would quickly learn this kind of high standard was indicative to how Chris approaches all aspects of his work and makes him the type of mechanic everybody wishes they could have.

To start, I asked Chris how he became a mechanic. “I just kind of fell into it,” he said. “I remember helping my dad as a kid, and then when I was 18 I had a girlfriend and needed a real job. Her brother was a tire tech and he got me a job. Then I became an oil change tech, and once I felt like there was more, I went into an underbody shop. Once that didn’t feed the need, I went into a service shop. As soon as the challenges weren’t high enough I moved on.”

I nodded, then asked Chris if he was the type of person that enjoyed mastering new skills. “I am,” he affirmed. “I really love fixing things, and when cars break down, I can see how people are stressed. But when you can turn it around and they’re happy, that’s what I really enjoy.”

When I asked why Chris decided to own his own car repair business rather than just work at one, it was a matter of fighting for his belief system. “I want people to be treated like I want to be treated,” he said becoming more animated, “because it’s the right thing to do. I’m not necessarily doing it for the money, because that’ll always come. The biggest reason is because I want to do my part to better society, better the industry and better the city of Coon Rapids. To give clients a place they can trust and be taken care of and feel like they’re not getting screwed.”

I found myself deeply admiring Chris’ passion for his values. Often when people look around at the world they think What can I really accomplish? If everybody had an attitude like Chris and many others in the Chamber, the world would be much improved.

“I never really liked who I worked for until I took this place over,” Chris continued. “It hasn’t been easy. The previous owner had a different business model than I and that’s made the journey difficult, but I’m glad I’m going through it. My previous experiences have allowed me to go through this and be up for the challenge.”

What Chris said prompted another question about the nature of the auto-repair industry in changing times. Cars are quite different than they used to be since they have onboard computers, loads of features and different specs. Chris told me auto engineers try to fit as much stuff as they can into a car to sell a product that meets everyone’s desires. Often, this makes fixing a car difficult for repair mechanics. “We have to be electric engineers,” he explained, “Know about hydraulics, IT work, networking, body repairs, and even know about welding. There’s so much that goes into it. We’re not grease monkeys anymore. It’s completely different. We’re professionals.”

Part of Chris’ other mission is to help educate consumers about what goes into car repairs and why costs are what they are. “Nobody ever budgets for car repairs,” he said. “They budget for things like new windows and siding, but not their car. It’s also the lack of experience in competent technicians. We have a dark cloud over our heads from mechanics screwing people over. So I’m trying to change that.”

A good example of how cars have gotten more complex is how much goes into changing the spark plugs. It used to be a job someone could do in their driveway, but because of modern designs, Chris needed to remove an intake manifold just to get at the spark plugs on a car he repaired recently. “I’ve heard that on a Ferrari you have to pull the entire engine to change the spark plugs,” Chris said, causing me to be quite surprised.

YouTube “do it yourself” videos have done a lot of harm for the automotive repair business, because oftentimes videos show people doing shortcuts that are unprofessional. “Anybody can fix cars the wrong way,” Chris said. “I had someone watch a video on YouTube where a guy did a six-hour job in two hours. When I watched the video, the guy physically bent a pipe out of the way instead of taking it out. I’m not going to do that. I’ll fix your car the right way.”

As hard as Chris works, he also tries to keep a tight lid on how much time he and Abby, his office manager, work at the shop. I noticed the business hours were from Monday to Friday only, and that surprised me. “We try to be out of here on Fridays around three to four,” Chris explained. “If you can work hard Monday through Thursday, you can get out of here and spend time with family. This job is not easy.”

Chris was also quick to explain that sometimes he stays late or will come in on Saturday when times are busy, as every business owner sometimes must, but for him, it’s still about maintaining a balance of working hard and resting. “I learned from my dad, ‘If it feels like work, it’s work. But if it’s fun, it’s not work.’”

I understood what Chris was getting at. When starting up a business, it’s going to require more time and effort to get everything going, but extra work is mostly on his own terms, which is why the shop is not open on the weekend.

In the summer time when Chris has an opportunity to get away, he likes to go up north to the family cabin. “It’s about three and a half hours away,” he said. “I grew up being an outdoors man. I love to fish, hunt, camp and just be outside. It’s noisy here. But being in the middle of the woods is peaceful and beautiful. I want to be fully present there. It’s more relaxed with no time frame. It’s sitting on the boat, talking about whatever, making memories with the kids. You learn a lot about yourself out there.”

Even though Chris has only owned Sandy’s Auto Service since 2017, he already has plans for what he’d like the future to be. “I’ve got some really big dreams that go beyond this place,” he said, “But this place? I’d love to eventually have three technicians. That’s a whole other set of challenges and stresses when you hire employees. You gotta pay for good help, and good help is not cheap, so that’s a struggle.”

There was a moment of silence, but sensing Chris had more to say, I waited while he gathered his thoughts. “Here’s the thing,” he finally said. “I have Abby and she does her job and she’s great at it. I don’t question what she does. I’d need to find the right people for the job, give them the tools to succeed and get out of the way. But you also need feedback from your employees. Just because I write the checks doesn’t mean I’m always right.” 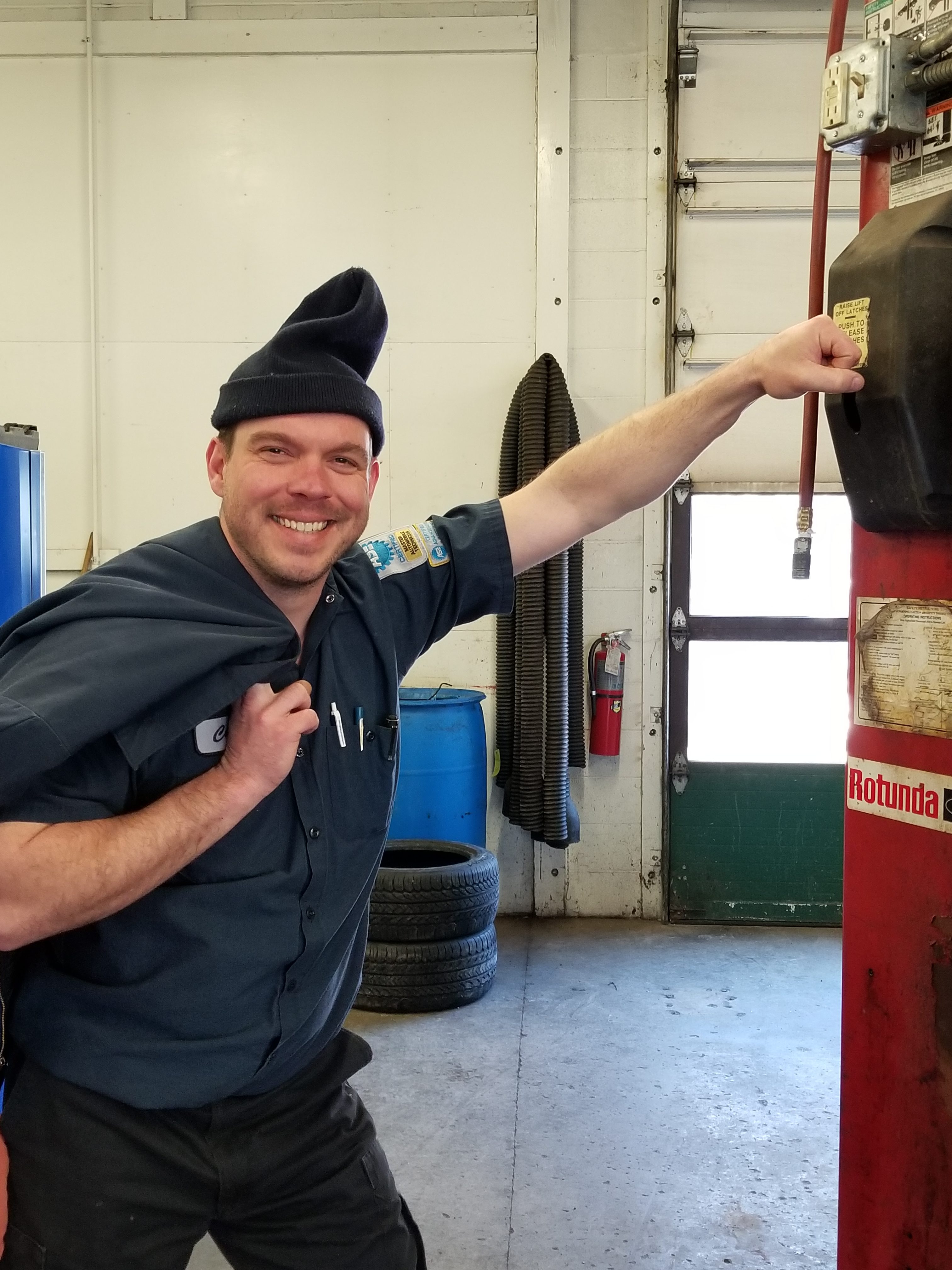 I nodded thoughtfully, mulling over what Chris said. I asked if his method to approaching business is intuitive, or if he ever went to any classes. “It’s taking 20 years’ experience, all the good shops and bad shops, and hear what others have to say, what feels right,” he replied. “And to be honest, I’m kind of winging it, but there is structure. I keep repeating myself, but being honest, there’s no fake when you step into the shop; this is who I am.”

Chris was also quick to talk about how helpful the chamber has been. “I’ve seen a significant increase in referrals. I generally come in the winter time when it’s slower for us. Even though I don’t’ say much—I don’t even do my own commercials because I hate being the center of attention– I’ve met some great people. Pull me away individually and I’m fine. At some point I’d like to give back and return the favor.”

If you’d like to learn more about Sandy’s Auto Service, contact Chris at sandysautomn@gmail.com or call 763-506-9996 option 1 to schedule an appointment.