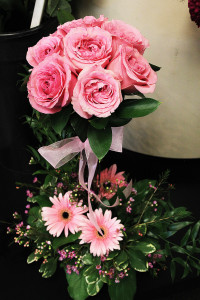 As I got out of my car to head into Schaaf Floral (located at the intersection of Mississippi Street and University in Fridley), I couldn’t help but notice how overcast the skies were and the way the wind whipped. I pulled my jacket just a little bit tighter and walked into the flower shop, thinking about how unfriendly the weather had been all week.

As soon as I opened the door my grimace from the wind was replaced with a smile. The shop, which was much bigger than I expected, had so many colorful things to look at. There were orchids, ferns, and colorful Easter decorations. I saw bouquets made of candy, tulips and a large refrigerated section full of expertly put together arrangements.
The shop itself was quiet, but not a “dead quiet.” I noticed the employees were busy, happily putting together arrangements at large stations in the back and setting up new displays in the front.

Schaaf Floral emanated contentment, a feeling many of us struggle to grasp.

Almost immediately I was greeted by a genial woman in a bright purple tweed jacket and a black apron. “Can I help you?” I nodded and told her I was here to see Bud. She smiled, held out her hand and began escorting me through the back of the shop. “Bud!” she called. “Your two o’clock is here.”

Bud greeted me with a warm smile and a firm handshake. He donned a black rimmed homburg style hat with a small feather tucked in the ribbon and a brown tweed suit jacket which overlaid a tan sweater.

As we stepped into his office, I was amazed by the number of pictures that decorated the walls. There were pictures of Presidents, baseball players and other people I didn’t recognize, all taken with an amateur camera. These pictures told me there was a lot more to Bud than meets the eye.

Looking around, I commented that it didn’t seem like he originally started out in flowers. Bud laughed. “Oh no. My wife Honey opened Schaaf Floral in 1970 just a half mile from here. She was married to a State Senator and I was his Treasurer. So I was there when the store opened and always bought my flowers there. In 1987 after we’d both been divorced for 14 years, I called for flowers because my best friend had passed away. She was the only one in the store for two hours that day, and she answered the phone when I placed my order.”

Bud looked away in the distance and smiled as he remembered. “Later I called her up and said, ‘I’ve got two tickets to the Gospel of Colonus, but I’m not looking for a date.’ She said, ‘I’ve already seen it, but I’d love to see it again. I’ll buy dinner.’ After that, we started doing social stuff together.”

As Bud continued to tell me the story of how he and Honey got together, I couldn’t help but think how fitting it was that at the heart of this flower shop, lay a wonderful love story. Several months later Bud asked Honey on an official date. He started working at Schaaf Floral because, according to Bud, when you date a florist, the only way you can see them is if you work with them. “I started out as a flower cleaner and was in charge of delivery,” he said. “But I was also looking for a niche, so I began to study the preservation of flowers.” 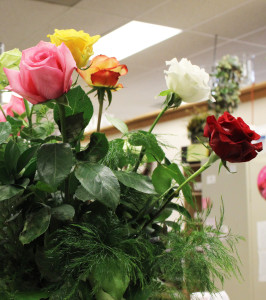 These are the Schaaf week old flowers in Bud’s experiment. They look perfect.

He pointed to two bouquets sitting on a table outside his office. “Do you see those flowers and see how the one bouquet is wilted?” I nodded. “That’s our competition. I ordered them a week ago to see how long they last. Our flowers next to them look completely fresh even though they’ve been sitting there for the same amount of time.”

This grabbed my attention. I asked Bud to explain to me how they are able to make their flowers last so long.

“It’s not hard, but it does cost time and money, which is something many florists aren’t willing to do.” Bud explained to me that preservation also has to do with how the flowers are handled from the moment they’re harvested to the moment they arrive at the shop. Flowers must be cut at the right time and chilled immediately.

Once the flowers get to Schaaf, they are cut and put in a preservative and the flowers go into the cooler until they are needed. When the florist takes them out of the cooler to design an arrangement they are put in a different preservative. When the designer is finished putting them in an arrangement they are sprayed with a vitamin mix called “Crown and Glory” and are then chilled until they are picked up or delivered to the client. As I continued to ask questions Bud offered to show me each of the stations in the back, which I heartily agreed to see.

Honey and Bud’s zeal to go the extra mile in their business hasn’t gone unnoticed. As we continued to talk about flowers Bud revealed (rather casually) that Schaaf Floral has some really big name clients. They’ve done flowers for 3M golf tournaments, Medtronic business luncheons, galas including an 80 table event for “Wounded Warriors,” the memorial for Twins player Harmon Killebrew, and the 11 Who Kare event to name a few.

As we made our way back to the office Bud said, “Honey is the heart and soul. She’s the real brains of the operation. She owns it. I’ve always said that she is smarter than me.” I could see the twinkle in his eye. “She doesn’t even have any formal training. Before she opened the shop Honey had been accepted to the New York School of Dress Design. She ended up accompanying a friend to her interview at Mayo and waited in a floral shop across the street.” Bud leaned in and smiled. “They hired her in 30 minutes, just from her being in the store. And within six months, Dr. Mayo was picking her up from the flower shop to do arrangements for his house. She’s a natural. Since then she’s taught floral design at several floral shows and conventions,” he concluded proudly.

I told Bud that they seemed to complement each other really well. He smiled and said, “Honey and I have things pretty well divided up. I do the computer stuff, the marketing stuff, the networking stuff. This is the perfect job for me. I’ve got a little ADD so I can switch between jobs and even take a delivery if I feel like it. Delivering is fun. People are always happy to see you. ”

I was going to ask Bud to tell me a fun story about delivering, but he had one already lined up. “Do you see that guy?” he asked pointing to a picture on the wall. I nodded. “That’s Kirby Puckett. He played for the Twins, and I had heard he was retiring. So I went down to the Metrodome with some flowers and a rhyme I made and parked right in front. There was a policeman and he said, ‘Hey! You can’t park there!’ I told him, ‘I’ve got a rhyme and flowers for Kirby Puckett and I need to deliver them to his office.’ The cop looked at me and said, ‘Alright fine. You can go up.’ You can get in anywhere if you’ve got flowers,” Bud said, his eyes twinkling again. “So I marched right up there and delivered them. He wasn’t there of course, but I did get that note from him later.”

Honey had briefly stopped in and reminded Bud of another appointment. I smiled, because even after all the years in business together they were still friends and still very much in love. I commented to Bud that it seemed like they had no plans of retiring. “We don’t have any plans to slow down,” he confirmed. “When I join networking groups I’m the oldest guy there, but I don’t feel it. I feel like I’m 30. It’s only when I look in the mirror and I say, “Whoa! What happened to you Slim?’”

As we concluded our time I asked Bud if I could take some photographs of the shop, and he was kind enough to oblige. It was wonderful walking around, taking pictures of the arrangements and soaking up the atmosphere.

When you go to Schaaf Floral, you won’t feel like a customer for long. I guarantee you’ll feel like one of the family. As I walked out of the shop with a dozen gifted roses, I know I did.

If you’re interested in learning more about Schaaf Floral please visit their website at www.schaaffloral.com or stop by their flower shop located at 6554 University Ave NE, Fridley, MN 55432.

“Bud” and “Honey”. I didn’t find out until later their real names are Erwin and Marcia, though everyone refers to them by their nicknames.