Sue and I talk about what working in a chemistry lab is like, the sport of running and how living overseas can afford unique opportunities

When I walked up to the counter of the Caribou on 81st  Avenue in Spring Lake Park, a woman with sandy blonde hair turned around and asked if I was Amy. When I confirmed, she told me with a smile that I had pulled up next to her in the parking lot, which meant we essentially arrived at the same time. I tried to think of another time this happened during the course of the blog and came up empty. After getting my coffee, I walked over to our table and took my place across from Sue, eager to get started.

Before coming to the interview, I had read through Sue’s Linkedin profile and what I saw greatly impressed me. She graduated with a degree in biochemistry from the University of Minnesota and is now president of Instrumental Research. I was curious about the path her life took and was not disappointed.

“I graduated when I was 32,” Sue began, “And had this big dream of working for Aveda, making shampoos and such. My parents had a family business, but I was young and wanted to avoid being involved at all costs,” she lightly laughed. “My dad said, ‘Do you want to work for somebody else, or for yourself?’ and I thought, ‘Hmmm…maybe I want to work for myself.”

Initially, Sue had gone to school for a certificate in computer programming and was a Unix programmer for five years. But the isolation in a separate cubical quietly writing lines of code all day was dissatisfying, and that was why Sue went back to school. “By the time I graduated I had a three-year-old son,” Sue recounted, “And I was seven months pregnant with my second son when I walked the podium. My three-year-old rushed the stage when he saw me up there,” she laughed. “He thought it was going to be a parade!”

Instrumental Research was founded in 1977 by Sue’s father, who Sue described as “being the science guy” while her mom focused on the business aspect. “My dad worked for a large company,” Sue said, “And left his full-time corporate position while my mom was a stay-at-home mom. That’s pretty gutsy.” I nodded in agreement, and Sue added thoughtfully, “Being married, I don’t know if I’d be excited if my spouse did that.” I thought the same and wondered what it was like to start a business under such circumstances. Sue explained that her mother eventually worked at the business as well, making sure everything was running smoothly and seeing to the HR side of business.

“I was going to school when I started working there, and I think the employees were nervous that the owner’s daughter was going to be their boss right away or something. Nope!” she grinned. “Started from the bottom. I think it was probably four years till I finished my degree. Dad was an ideas man and went off to do other things pretty quickly. I was more of the lab supervisor and my mom was doing the human resource end of things. About three years ago she retired, and I took over being the full owner. I’ve been president for about ten years.” 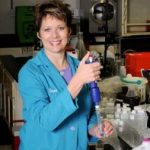 Instrumental Research does a lot of different types of water testing such as watershed districts, park and rec boards, city drinking water, well water for homes, and they also work with thirty different municipalities in the state of Minnesota. “We also test septic but,” Sue scrunched up her face in a disgusted look, “I try to stay away from that.” Sue also described that normal tests look for microorganisms, phosphorous and nitrogen. When I asked Sue if the nitrogen was because of fertilizer, she confirmed. “A lot of people don’t realize,” she said gesturing with her hand, “What you put on your lawn ends up in your lakes and that’s what feeds the plants. When you think about it, when you wash your car in your driveway, where does the soap go? It runs down the street into the drain. It’s a big system.”

The lab is often subject to samples coming in at irregular times, a lot of it depends on the weather. When it rains a lot, that’s when a lot of samples come in. Bacteria tests need to be performed same day, nitrate is 24 hours, while general lake analysis can take place a couple of weeks after the sample is collected. I asked her if scheduling the week was difficult because of how short some of the tests are. Sue affirmed my question and said, “You know in the show Grey’s Anatomy where they’re scooting around on chairs up and down the hallway but out in the world there’s a crisis happening?” I laughed, saying I understood. “It feels like that sometimes. Then the bomb drops, and someone ships four coolers and it’s filled with samples. People don’t always tell us they’re coming with samples either. When it’s raining and there’s storm runoff, that’s when we’re the most busy.”

I asked Sue if there was anything in their samples that was unexpected, and after a momentary pause she said, “We had a lake sample that had a fish in it once.” I gawked and asked her if it was alive or dead. “Still alive. We kept it and had a mascot for a while.” I got a good laugh at that. Sue described doing chemistry in the lab like baking a cake. When you follow the recipe, you can expect the same results. I found the comparison interesting since I hadn’t ever been in a lab before. I also asked Sue if the lab was quiet because people were concentrating. “No it’s not like that,” she said. “You obviously have to watch what you’re doing, but we chat, put on music. There’s lots discussion over what we should listen to,” she smiled. “I always say, ‘If it’s angry screaming music, then we’re switching it.’”  I laughed and said that was probably a good thing.

The conversation began to shift, and I asked Sue what she enjoyed doing outside of work and the lab. “I’m a runner,” Sue smiled. And it’s fairly recently, too. I’m only in my fifth year. I got started because of this group called ‘Mom’s On The Run’ and a new one was starting in Fridley where I live. Everyone was new. There was a couch to 5k program, so I did my first race on Mother’s Day. My family came to watch me run, which was fun.”

Sue’s group is one of the main reasons she’s so involved with races, and she’s participated in multiple half marathon races, triathlon races and relay races, one of which she will run the second weekend of August. “It’s called Ragnar,” Sue explained, “And it’s a 200-mile race in 48 hours from Winona to Minneapolis.” I commented to Sue that it must be beautiful. She nodded. “It’s also hilly. And hot.” I laughed, then asked her to continue. “You run all day and all night,” Sue said, “And the team is twelve runners, with each person running three times. I’m captaining a team for the second year in a row.”

The race which she was describing was different than how I first pictured a relay race and I asked Sue how training for such a race was different. “The key to running Ragnar,” she said leaning slightly forward, “is you have to practice running twelve hours three times. For a half marathon, if you can run ten miles, you can probably push out the extra three on race day. But a relay is completely different. You have to prepare your body to start and stop. So you run for eight miles, then take a six-hour break in the van, then run another ten, and so on.”

I always pictured running to be a somewhat lonely sport, where you just spend time running on your own and training, but the relay race is all about the people. “The big thing for me is the team,” Sue explained. “There’s the comradery. We decorate the van and wear team t-shirts. I buy a lot of shirts and costumes for races. That’s probably one of the reasons I run as much as I do. The race ‘bling’ as I like to call it, and the t-shirts.”

Sue’s also had some amazing opportunities to travel on account of her being a business owner and her husband being a college professor. In 2009, the family moved to Galway, Ireland while he was on sabbatical for five months. I asked Sue if it was difficult to leave the business for so long. “I had two really good long-term employees and my mom was there. They ran the business. I checked in, but the time change was difficult. My boys went to public school, which is Catholic, so they wore the uniforms and went to church. Ireland public schools have more holidays, so we were able to take the boys to mainland Europe.”

The family trip included a stay in London, Brussels, Germany, and France. I told Sue I thought it was an amazing opportunity, and she agreed. “It was really good for my kids. Hopefully, it will lend them well to travel and life, and they’ll try new things. My husband is so obsessed with Ireland I honestly believe we’ll own property there someday,” she said with a laugh. Sue also went on a European riverboat cruise, which was a Viking cruise. We talked about how there’s always pros and cons to business ownership, but the flexibility is a huge plus.

Sue also commented on the chamber, and what it’s meant. “I can’t do everything,” she said, “So through the chamber, I have people. I’m my own IT department, so if something goes wrong I say, ‘I got a guy.’” I laughed. “My employees hear me say that all the time,” Sue continued with a gleam in her eye. “You interviewed Alex last Month, right? He’s my laundry detergent guy.”

To conclude our time, I asked Sue if she had any long-term plans for her business. She took a sip of her tea and said thoughtfully, “In the beginning I always wanted it to be some big empire, but that’s changed. I can’t make sure it’s being run to my standards if it’s too giant, and we own our building. I don’t want to outgrow it. I like being able to step away for trips. What I’d love to see, is us making more profits and get better equipment so we work smarter not harder.”

I honestly loved what Sue said, and felt that many in the chamber can relate. There’s just something about being a small business owner, having a small set of employees, taking care of your business, and it not turning into a mega-corporation.