It only took one encounter with Amy Weber-DeRaad to know that I needed to interview her. I could tell she had a unique perspective and a different kind of story tell, so when we were finally able to connect, I knew it was going to be something special.

Amy and I met up at the Caribou just south of the Blaine Tavern immediately following a MetroNorth Chamber Sunrise Breakfast. Having a better feel for the area, Amy beat me to the Caribou and waved me down to where she was sitting.

Rocking her black Mary Kay beauty coat, I couldn’t help but think to myself how stylish the jacket was and just how well she wore it. Does she ever get tired of wearing it? I silently wondered. The unity and branding for those really give an air of professionalism. I never did get around to asking her about it because we dove right into the heavy stuff.

Amy broke off a piece of the chocolate chip cookie she had bought and then asked me what I wanted to know first. While I knew something about Mary Kay, I wanted Amy to give me an overview of the company knowing she would probably tell me something extremely interesting.

I wasn’t disappointed. “So Mary Kay Ash was a real live person,” Amy said as if she were being shot out of a pistol, “who started this business for women so that women could be successful regardless of whether or not they wore a skirt. She was about to retire and had 5k to her name. Nobody thought she could do it. Everyone thought she was going to go bankrupt. Basically Mary Kay said, ‘Well then, we’re going bankrupt because this is what we’re going to do.’ And now Mary Kay has been in business for 53 years.” I wasn’t expecting a power woman story, but given the nature of Mary Kay I really shouldn’t have been surprised. “We have our own manufacturing and research facility,” Amy continued. “We have scientists to study the skin and use that knowledge to develop products. We find ways to do things better.”

I asked Amy to tell me a little bit more about what makes Mary Kay stand out from the rest of the consulting businesses out there. A lot have sprung up in the past couple of years but, as I told Amy, they don’t seem like they’re going to stand the test of time. Fully grasping what I was saying she nodded and said, “We have on-trend items, but we’re not a trendy company. Because a fad could only last for two months and go away, we research first. Our mineral foundation is a good example. We looked into it to see if it had some long-term capabilities and then when we launched it was one of our most successful in the company.”  In addition to the staples, Mary Kay offers seasonal items to help their consultants get in front of customers. I told Amy this method of business seemed to make the most sense for Mary Kay, but unlike some, it doesn’t fall into the trap of cultural fads.

“The other thing I love about Mary Kay is the sisterhood we have,” Amy said. “It’s not a company where things are held close to the chest. We believe that if something is working it should be shared with everyone.” I told Amy this seemed unusual because in the consulting world, no matter what you’re consulting, tactics are not regularly shared. She shook her head when I said this and smiled. “You know that everyone in Mary Kay starts as an independent beauty consultant. If you want to go further up, you have to work your way through it.”  Mentoring is a big part of how Mary Kay expands business which allows women to be taught with hands-on experience, rather than conceptually. It also allows the integrity of the company to pass from woman to woman.

We shifted the focus of our conversation to how Amy became a full time Mary Kay consultant. “Back in 2012 I was asking God ‘Are you still speaking toady?’ At the time my niece was getting bullied in school very severely. A lot of unkindness was taking her away from us. And I was taking a walk and I remember it so clearly. I was literally turning and taking a bend in the road, and it was placed on my heart, ‘Amy you have this business to reach women. Pay for her to go to school.’ And that was it. Period. Epiphany.” Even though this happened to Amy almost four years ago, I could tell from the slight shake in her voice that it was still a significant moment. “I went home and I was trying to remain calm. I didn’t want to call my sister and overwhelm her with my enthusiasm, so I Facebook messaged her and she immediately responded with, ‘You just gave me the chills.’”

Amy went on to tell me that the summer she spent raising funds for her niece she had her largest Mary Kay class of six to eight women who were all passionate about combining Mary Kay with fundraising. “After we got my niece into school I really sat down and started thinking about how I wanted to use the business.  I discovered there are a lot of ways to do good.”  Amy’s success in fundraising for her niece caused to her to pursue Mary Kay full time where she continues to use her business to fundraise. Anyone can contact Amy to use Mary Kay to raise funds and she makes it very simple for her clients.

“Actually I’m very excited to share this, I’ve been able to collaborate with someone who is a wonderful philanthropist in Anoka, and we’ll have specific nights where it’s dedicated to good causes. It will be really nice to have a brick and mortar place to host exclusive events. I can’t say more about it now, but it’s something that’s is coming soon,” she said beaming.

For Amy, the chance to use her skills to support non-profits with fundraising isn’t just exclusive to herself; it’s also a family endeavor. “You know those Rainbow Loom rubber bands?” I nodded. “My daughter came to me a couple of years ago with an idea her and a friend came up with to sell bracelets for the children’s hospital. She’s raised well over $200 since she’s been making them.” Amy’s daughter, I found out, was only 10 years old when she came up with this idea and the fact that she’s stuck with it for so long is nothing short of extraordinary. I asked Amy what it was like, watching her daughter follow in her footsteps.

“It makes me tear up. It’s very humbling. Your life is a learning ground for them. When they came to me with this initiative I could have said ‘Nope nope nope. It’s not going to work.’ But why do we have to make it so complicated?” Amy’s daughter calls her fundraising endeavor “Colors for Kids,” has business cards and even accompanies Amy to networking events. “She has some adult champions to give her awareness in the public space,” Amy said. Among those adult champions is Steve Griffiths of Impact Services, who has asked for a bracelet to be auctioned off at their fundraising event. Sophia accepted this challenge, and over the course of two annual events she helped raise over $3000 for the organization.

Amy’s zeal and passion to make the world a better place is infectious, and her belief in Mary Kay as a company and its products adds to the trifecta of her business. “Confidence is the most attractive thing you can wear. So many women come to me with questions, so the thing I love about our product line is it can help most anyone, if they’re willing to receive advice and give it a try.” I asked Amy what her favorite Mary Kay product is and she responded with a grin, “I love it all for different reasons, but I have to say my favorite ones are primers. Eye primer, brow gel. Helping things to stay in place all day. I’ve tried other brands so I know what other people are doing, but I’ve used Mary Kay since I was 19. I just love it.” You can’t ask for a better consultant than the one who really believes in the product.

I got the sense that Amy’s natural talent for selling and fundraising is how she carves out her place for doing good in the world, but the deeper belief is for everyone to find what their strength is and use it as a force for change. When I mentioned this, Amy smiled and nodded her head enthusiastically. “Exactly. I think of it like a large family. Someone might be pulling the plate, versus the fork versus the napkin for dinner. But if the expectation is the silverware goes on the napkin, nothing can happen until that napkin goes down.” 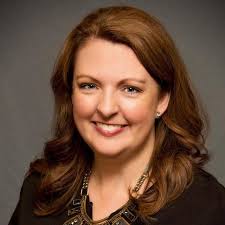 That’s the heart of why Amy does what she does. This conviction has caused her to make tangible differences in the world and the lives of people she knows. “If you believe in divine interventions, heart nudges or whatever you want to call it, honor those. I could have easily chosen not to listen. So you may not know what the nudge is all about, but if it’s something you have the power to do, do it. We didn’t have all the details, but we acted, and we saved a life.”

“A candle loses nothing of itself by sharing its light,” Amy continued. “So if you have that light, share it with someone else. Shine bright, right?”

If you’re interested in Mary Kay products for yourself or for fundraising, contact Amy at (763) 245-0164, AmyWeber-DeRaad@marykay.com, or facebook.com/amy.weberderaad.marykay.