Tales from the Chamber: January 2018 Special

From the office and back again, a scissors tale

The sun rises early in the morning, causing pink and orange light to stream in from the window and splash across the chamber offices. Eventually it creeps up to the high shelf upon which I’m stored. As the light hits me, it refracts, casting a small rainbow on the office wall. For this, I’m grateful. The sheen of my early days are long faded, but the array of colors reminds me I’ve still got it.

Lori should be in soon, I think excitedly. Today is going to be the best kind of day filled with laughter, adventure, and tales of success. There will be two ribbon cuttings for the chamber today, one at a Sunrise breakfast and one at a store. The one to kick off such a celebration is me, the scissors. The MetroNorth Chamber has been my home for far longer than I or anyone else can remember and though I have no business of my own, I am an honorary member.

I hear the jangle of keys at the door and know Lori is here to pick me up. Before doing so, she boots up her computer and quickly looks through her emails. After reaching up to take me off my shelf, she carries me to the car. It’s especially cold this harsh winter morning, and I feel almost frozen before I’m mercifully put into the back seat of Lori’s car.

I remember the days when Lori would just leave me in the backseat instead of touting me back and forth to chamber offices. It’s not every day a person sees scissors such as myself, and the first time her children saw me lying on the carpeted car floor, they squealed with delight. I’ll never forget the way their curious faces lit up as their questions tumbled out, straining ever so hard to reach what was beyond their grasp. After a short time of trying to dissuade the children from reaching for what they should not touch, my home stopped being on the backseat floor and started being on the high shelf in the chamber office.

We’re now at the Tavern for the First Friday Sunrise networking and my excitement picks up. Early sunrise breakfasts are a favorite event of mine, and today is full. From my place behind the welcome counter where I’m stored until needed, I can hear chatter and the clatter of plates. The chamber feels like an extended family, I think blissfully. Bud has prepared a new poem, and the singing banker makes an appearance. Ron is up for a talk this week as he gives instructions on how to drive safely in the winter. There is a roar of laughter as he shows an especially funny picture.  The air is warm, and I can hear business owners happily greet a new member.

Almost everyone sticks around for the ribbon cutting, and though I’ve lost a bit of my sheen it’s my time to shine. I’m pulled out of the shadows, and into the limelight. Even though I’ve been to hundreds of these events, nervousness starts to bubble up. I hope I can cut in one swift motion, I think worriedly. Perhaps I’m due for a sharpening. Lori’s husband always does such a fine job, and my blades are a bit dull. “These scissors are so much heavier than they look,” the business owner says with a light laugh. I get that a lot.

My fears prove to be unfounded, as pictures are snapped at the exact moment the ribbon is cut, and the entire Tavern breaks out in applause. I sigh in relief, another job well done, and I’m placed carefully on a nearby table. 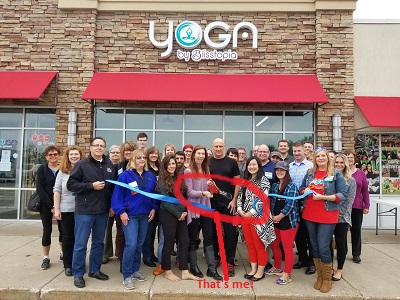 Ribbon cuttings are special, and a staple since the chamber’s formation fifty years ago. Families eagerly gather, friends come in support, and chamber ambassadors grin as a business takes its next step. Snip. A ten-year anniversary is celebrated. Snip. A new storefront is opened. Snip. A son takes over his father’s business. Snip. A new member is inducted into the chamber. Those are the moments I’ve been a part of, and as the many congratulations are said to the business owner and hands are shook, I feel giddy on the inside. Such a momentous occasion! I hope my red handles look dapper for the pictures and the camera got my good side. I’ve got the logo of the chamber I especially like to show off.

Eventually, the crowd begins to dwindle, and Lori begins to pack up her bags to be off to the next event. Don’t forget me! I think desperately. There’s been many an occasion where I’ve been left behind, but today, Lori stops before exiting the Tavern, turns around and walks back to where I was set down. “Can’t forget these!” she exclaims with a smile. Phew. Today’s going to be a busy day, I’m glad she doesn’t have to come back. 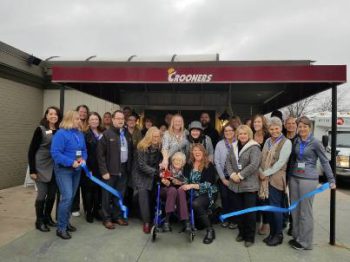 As I wait in the car while Lori attends a meeting between events, I think happily about the recent ribbon cutting at Crooners. Mary T brought her 98-year-old mother, and there was singing from on the stage. A large delicious cake was also catered to commemorate the occasion. This is what it’s all about, I think cheerily as we begin to drive to the next event.

We pull up to the store which has been decorated with balloons and there are tons of cars in front for the big event. The wind blusters, feeling especially harsh against the metal from which I’m made from. Inside the store are many new faces I haven’t seen, and a few of our ambassadors who I’ve known for a long time (hi Amy, Jon, Kat, Dick!). There’re many generations represented and the proud business owner looks over her notes for a short speech. I can see lunch has been catered, and there will even be a special discount for all who attend the ribbon cutting.

More members from the chamber trickle in, and everyone scoots forward just a little, happy to make room. From the front, Lori gives a slight nod, and the business owner begins. They talk about how they’d been let go of a job many years ago, and how that single act started them on the path to owning their own business. They talked about the hard times when the economy crashed and their business took a hit. The proud business owner looks around at the new business expansion and store remodel, some unshed tears just underneath the surface. Their perseverance is being celebrated today, and they deserve every ounce of praise. I’m handed over to the owner, and this time with more confidence I snip the ribbon. Everyone cheers while a proud mom hugs her daughter, beaming at the number of accomplishments so far.

I’m set down again on a counter, and a brief tour of the new building ensues. Such a happy day. It’s a perfect way to end the week and soar into a quiet weekend thinking through all the new memories and faces I’ve seen.

Back at the chamber office I’m once again put on my shelf. Lori smiles proudly then sits down at her desk to work. Soon it’s time for her to leave. Just before exiting her office she looks over shoulders up at me and we share a silent moment. No matter how many events we’ve been to, there’s just something special about the chamber family coming together and supporting one other. The lights turn off, and the sun begins to set. I’ve got to rest up this weekend because in the coming week we’re going to have quite a few ribbon cuttings, and I need to be in tip-top shape.

See you at the next ribbon cutting! 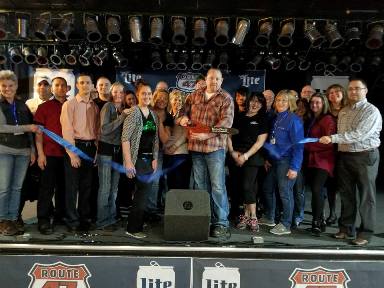 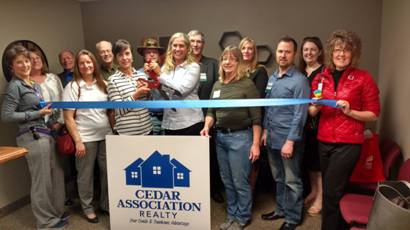 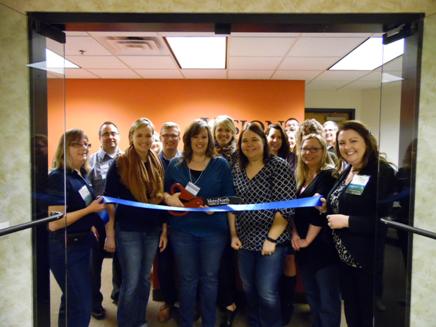