Tales From The Chamber: February Spotlight

A reflection on the past two years

Because I’ve been out of the country for most of this month, instead of trying to rush an interview and turn around a post, I thought this would be a perfect opportunity to talk a little bit about myself and what the chamber has come to mean to me.

First off, you may be wondering, “Where did you go?” Well, I’ve been traveling through South Korea and Japan this February with my husband. My best friend lives in South Korea, and the two of us have always wanted to go to Japan. So, we decided to go all out and make it the trip of our dreams. Why Japan? I think it’s always been special to me. I’m a millennial after all; whether we realized it or not, our childhood was heavily influenced by Japanese things. Pokémon, Nintendo, Tamagotchi, Dragon Ball Z, Naruto, Power Rangers, and to some extent, Transformers, all hail from the land of the rising sun. When I was in high school I used to love practicing writing characters with a friend of mine who was trying to teach herself Japanese. And now that I’m older, I find myself even more drawn to Japanese style storytelling and their culture. 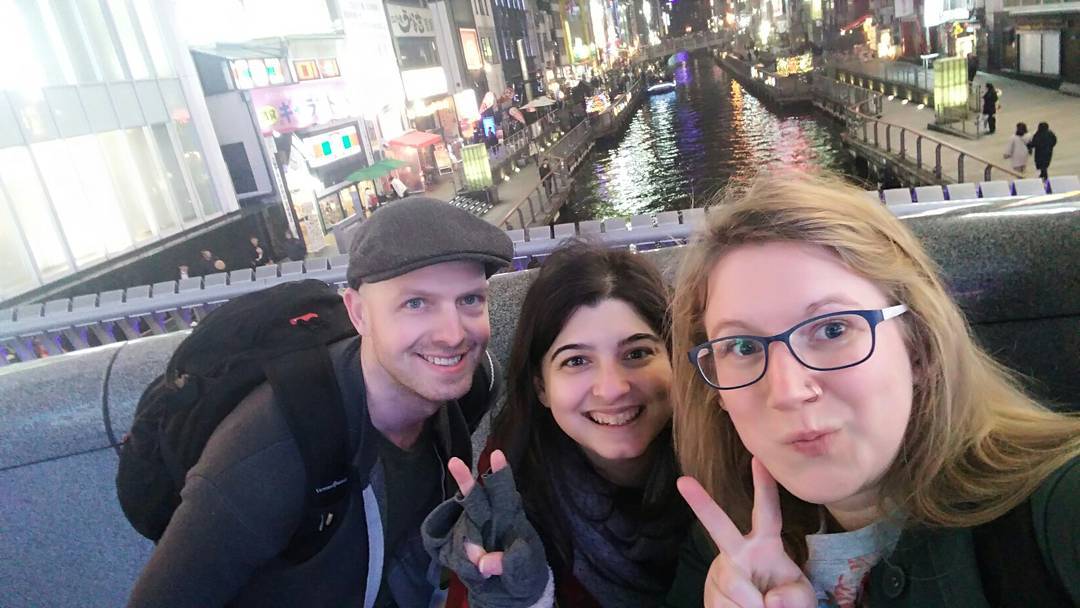 Levi (my husband), myself (middle), and my best friend Nancy in Osaka, Japan. Asia is best appreciated at night.

The idea to do “Tales from the MetroNorth Chamber” was straight out of Angie’s brain. I suppose that comes as no surprise for those of you who know her. I remember a few years ago Angie telling me that after trying out many networking groups, she finally joined MetroNorth. “They’re not like the others,” I remember her saying. “Some of the ones I’ve been to are so stuffy and impersonal. But MetroNorth…well, they’ve got lots of characters.” And it was maybe a year or so later Angie hatched her great plan. We’d interview different people in the chamber and spotlight them on our blog. And so, I met with Meg Chiodo two years ago at a Starbucks not too far from where I lived. I was so nervous. What if I couldn’t think of the right questions? What if there was one of those long awkward pauses which always seem to pop up in the middle of making small talk at a party?

Fortunately for me, Meg couldn’t have been a more perfect person to be our first spotlight. If you know Meg, then you know how outgoing, warm and friendly she is. We hit it off right away, and all my worries proved to be unfounded. I had a great time, and I ended up having a lot of notes to use in our first article.

From there, I began to look forward to my monthly interview. Who was Angie going to set me up with? What would they be like? I suppose that sounds a bit like a blind date, but in a lot of ways, doing an interview is a lot like a blind date. There’s the moment where you walk into whatever restaurant or coffee shop you’re meeting at, hoping to spot a person you’ve never seen before. Then there’s the quick introduction before coffee or food is purchased, and from there, you strive to learn something about the person you’re talking to. Talking about work is usually easy for people, but what else in their life brings them joy? For Kari Hefnider, it’s rescue dogs and raising awareness for breast cancer. For Dick Fisher, it’s spending time in Arizona. For Jim Kugler, it’s doing events with the Lions Club.

The other thing I find fascinating about interviewing is the unexpected connection you find with someone. Karen Andler and I discovered we had a mutual acquaintance which happened to come up because we were discussing where she lived in the Twin Cities. Steve Griffiths and I ended up having similar backgrounds in church leadership, and because of this, we stayed at the coffee shop way longer than intended. Neal Elder and I have a similar passion for Nashville, which we discussed at length. It makes me believe you can find something in common with most everyone if you try.

I noticed a common thread which seems to weave its way into almost every interview I do. Nearly everyone I’ve talked to has either been let go from a job or fired from one, and I think only one person is actually doing the job they studied for in college. This means a lot to me because that’s also part of my story.

I went to school for “youth ministry,” something I was (and still am) passionate about. I knew exactly what my life was going to look like. I was going to work with youth in some capacity for the rest of my life. I took extra courses over the summer so I could graduate on time in four years. And then…one day, in a blink of an eye, an earthquake happened.  I was fired from my job. “We’re looking for someone with a different skillset than you,” they said out of the blue. Literally the week before my husband and I signed the papers for our new house. I had to find work, and fast. Except it was 2013 and there was no work to be found. So, I delivered Jimmy John’s in order to make ends meet and felt humiliated the entire time I was doing it.

A friend of mine hooked me up with Angie in 2014, and I was incredibly grateful. She taught me new skills, and most importantly, helped me rediscover my love of writing. I think that’s why everyone’s stories mean so much to me. It became normal for me to hear, “I got fired from my job” or “I got let go from my job.” It became easier for me to talk about what happened to me because I knew I wouldn’t receive judgment. Being let go from a job isn’t easy, but like a lot of people in the chamber told me, it opened new doors to discover something off the beaten path. I can honestly say I like the way my life looks now a whole lot more than it did six years ago. And there’s no shame in being let go from a job or if you decide to do something different than what you studied for. You just have to get back up and move forward, even when it seems like all hope is lost.

I’ve learned a lot of valuable lessons from my time interviewing people at the chamber too. All of you have caused me to think critically about myself, what I’m doing, and how to keep forging ahead. All of you are so inspirational, and I mean that from the bottom of my heart. You work so diligently for your communities. You love doing what you do, and because of what you do, the world is a better place. That includes both for-profits and nonprofits. There’s a genuine sense of teamwork and fun in the chamber, like you’ve got each other’s backs. Thank you for that. And to those of you who’ve been interviewed, I genuinely appreciate you taking time out of your schedules to have a cup of coffee with me. And to those of you who I haven’t met, you could be next up for our spotlight, because we’re still going strong with no signs of stopping.

I know I’ve already said a lot of thank yous, so I’ll just say one more: thank you for reading our blog. Even though I have a great time, it doesn’t do anyone much good if it isn’t translated on paper. Your comments and feedback are encouraging.

May your 2018 bring you joy and may you be fruitful in all your upcoming endeavors.