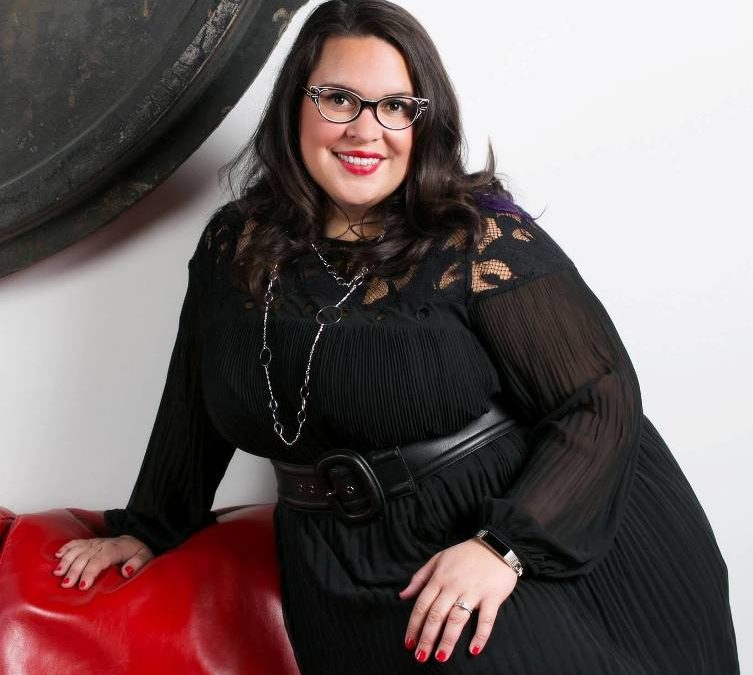 Amanda and I bond over traveling, retro houses, and magical parties.

When I walked into Five Watt coffee off of Hennepin Avenue in Northeast Minneapolis, every seat, including those at the coffee bar, were taken. A half a heartbeat later, Amanda came in wearing a black dress, black sunglasses, and chatting away to someone on her phone. We shook hands and I gestured to the coffee shop, explaining apologetically that we’d have to leave, and how I’d never seen it so full.

Unphased, Amanda flashed me a grin. “Let’s go to Eli’s just down the road! They’ve got food and drinks.”  Happy for the suggestion, I agreed and drove one minute down to Eli’s, a tiny restaurant and bar that ended up looking way bigger on the inside. “Amy! I’m Amanda,” she said with a knowing laugh and sticking her hand out. “It’s good to meet you.” We slid into an oversized booth with oversized leather benches and started looking at the menu.

Drinks were requested, fries were ordered, and feeling adventurous, we asked for cream cheese wontons stuffed with duck. I knew we were in for a good time. Amanda was enthusiastic, genuine, and funny. She reminded me of my best friend from college, a resemblance that would only get stronger as time went on.

Being from the East Coast, I immediately noticed Amanda didn’t have a noticeable Minnesotan accent and inquired if she was from out of state. “I’m from Minnesota,” Amanda said surprising me. “I have an accent when I talk to my mom, but in real life I don’t because I was an exchange student. I was 16 when I went to Austria. I love 16-year-old Amanda. ‘I’ll learn German even though I’ve taken four years of French in school.’” Her comment made us chuckle. “It was amazing to live around people with different accents who were all at least bilingual” she continued, “and learn German.”

As we sipped our drinks, Amanda explained how she lived in Austria for a full year, returned to the states for her senior year, and then headed back to Germany for college. “I then moved to the Netherlands and attended Webster,” Amanda said. “They have campuses across the globe, so I got to be in a school with no more than 200 people. My high school graduation was 550 people. I never had that experience like people do at the U where there’s hundreds of kids in a classroom and the teacher is a grad student. All my professors were the professor.”

I related to Amanda’s story. Although my college wasn’t as small as hers, I was always grateful to attend a school where going to lunch with professors was considered normal and classrooms were small. “I got to be really engaged,” Amanda said. “My degree was in international relations and I got a minor in management. I’m still looking for a job that requires a bachelor’s degree,” she quipped.

Even after her time in Germany and the Netherlands, Amanda wasn’t quite done with international travel. After hearing about the Peace Corps, she began considering it for her next adventure. “I wanted to dig wells, or teach English, some kind of meddling thing,” Amanda said waving her hand. “I went to Thailand and lived in a luxury high rise on the ocean. The cows mostly used the ocean. I sat by the pool and was very tan.”

The cows used the ocean, and her apartment was filled with cockroaches. Ginormous, invasive cockroaches. “There was nothing you could do besides spray all the Raid you had,” Amanda frowned. “You couldn’t live without cockroaches in that climate.” There was even a point where she went on a trek into the deep jungle and truly experienced roughing it. “I slept overnight on the hut floor, which is a big deal for me, a mosquito net over me, sleeping bag as a pad and peed outdoors. That was fine but it wasn’t my cup of tea.”

I laughed outright before taking a bite out of my duck-stuffed cream cheese wonton. Even in my brief time with Amanda, I couldn’t imagine her staying in the middle of a jungle.  After her Thailand adventures concluded Amanda traveled back to Webster’s home campus in Saint Louis where she got reacclimated and began looking for a job.

After doing some temp work, Amanda got her big break when she became a receptionist in a Section 8 housing apartment complex and got promoted before heading off to manage a luxury high rise. “Everyone is the same,” Amanda said. “Everywhere you go. People pay their rent late. It’s the same excuses. Like, it’s not shitty you’re paying your rent late, it’s shitty that you’re lying to me about it.”

I found Amanda’s commentary highly insightful and important. Because of the stereotypes, many people would assume just those in lower income brackets have a hard time paying rent when in reality, money problems and people dodging responsibility happen everywhere. When I told this to Amanda, she agreed. People, we decided, are just people.

“I became the community manager and took on the nightmare of herding cats,” Amanda said switching subjects. When I asked her what she meant, Amanda groaned. “I managed a staff of 14 and, girl, I got calls 24 hours a day because we had a 24-hour concierge. And when people don’t solve problems on their own, they’re going to wake you up at 2 a.m. That’s why it felt like herding cats.”

After the recession winded down, Amanda bought a house, met her husband and decided it was time for a new job. Like many business owners, she felt trapped in the middle management position where there wasn’t much actual control. “I choose how many people I will work with at any given time and I get to dictate how I’m treated,” Amanda confirmed. “And you only fail by quitting. Eighty percent of real-estate agents aren’t there after 36 months. I’m still here!”

Amanda’s high personal ethics and care for everyone she meets means that for her, being a real-estate agent is about building relationships. “I’m thinking about every person I work with,” she explained, “And how real-estate isn’t transactional, its life-long relationships. I want to be the realtor that’s at your housewarming party because that’s my biggest compliment. Or your baby shower. I’ll bring gifts! Just tell me where you’re registered.”

This type of high relational caring from Amanda is something I felt even when I was interviewing her. It’s a genuineness that spills out no matter where she is or what she’s doing. We hadn’t known each other for long, but in the back of my mind, I was already wondering when Amanda and I could shoot the breeze without a laptop between us.

“I like being able to take control of issues and solve problems for my clients,” Amanda said. “I don’t want my clients to feel like their issues aren’t run of the mill. You only buy a house maybe once or twice in your life, so I want to make it as smooth an experience as possible.”

Smooth isn’t the only word to describe how Amanda conducts her real-estate business, it’s also packed with fun. “I love hosting parties,” Amanda grinned. “My entire business is events. We do pumpkin pies near Thanksgiving. There’s so many different ways to connect with clients.” Amanda pulled out her phone to show me an event she had recently, and I scrolled through the pictures with a smile on my face. So many different people showed up, all there to have a good time. “Fun will be had. Guaranteed. If you’re buying a house with me, it’s in the contract,” Amanda said seriously.

Amanda travels everywhere for her business around the Twin Cities, and I became curious if there was a type of house she particularly liked. “I hold an Old Home Certified designation!” she exclaimed. “Like, I love that pink bathroom, the funky basements. I love homes that convey their character. One time I was having an open house, I don’t know where, it was real far out, but it was built in the ’70s and when I went, I found out there was engraved duck wood paneling in the basement. With lake vistas. I asked my client if they were a hunter,” she laughed before showing me the glorious wood paneling she’d just finished describing. 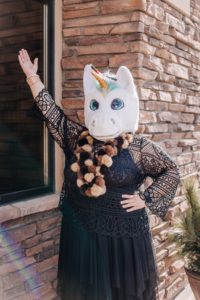 I also heard Amanda throws “unicorn parties” and I just had to know more. With a smile, Amanda asked if Angie spilled the beans (she did) and then proceeded to explain. “First off, I’m magical, and life is like a magical event, right?” I nodded. “So, I have a lot of unicorn parties. I have them for my birthday, or anytime I have a potluck. I get unicorn plates, napkins, rainbows. Target is great for that. My friend got me this unicorn headband and it lights up. I have it in my car. I also have a unicorn floatie in my pool that everyone gets to use and just unveiled a tinsel unicorn ‘statue’ for Christmas this year.”

I asked Amanda if her clients ever got unicorn parties, and she leaned in, lowered her voice, and said, “If they appreciate the magical, or if we’ve been searching for a house that’s super specific, they might get something unicorn themed.”

The snow was beginning to fall heavy outside the window, and we’d gone way over time. I regrettably began packing up my bag, happy to have met Amanda. She gave me her card, and we made nonspecific plans to grab coffee or food again. After all, I still had to tell her about my travels to Korea and Japan. The whipping winds didn’t take away my smile, and I thought about how lucky Amanda’s clients are to have someone like her. 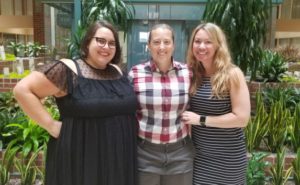 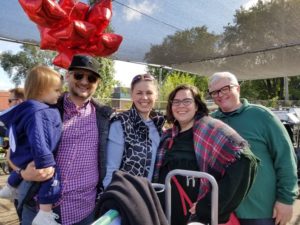