As soon as I walked into the Caribou, Mike greeted me with a huge smile and waved me down to the table where he was sitting. He was hard to miss in his bright pastel official collared shirt. After exchanging pleasantries and a, “Sorry I’m a bit late, I missed the exit” from me, I grabbed my coffee, my brownie and sat down.

When you are first introduced to Mike it doesn’t take long to realize that he is one of the nicest people you’ll ever meet. He has a big smile, talks with his hands and an infectious zeal for whatever topic he’s discussing. I knew immediately that this interview was not only going to be interesting but a blast as well.

Like so many people who are entrepreneurs, Mike first got his start when he was laid off from work. “I had a job, didn’t like and ended up getting laid off from it. This was toward the end of 2005 and I said to my fiancé (she worked at the same company and also got laid off) I’m tired of looking for work. If you could do anything, what would you want to do? My fiancé said, ‘I’ve always wanted to clean houses for a living.’  I said, ‘Are you serious? Well, buckle up!’”

Mike saying, ‘buckle up’ proved to be a bit of an understatement. Within a week he had the DBA filled and put a website together for their cleaning business. It didn’t take them long to get their first customers and it’s been full steam ahead ever since. “I wasn’t kidding when I told her to buckle up,” Mike laughed, confirming my earlier thoughts. “Some people aren’t cut out to work for someone else. Maybe it’s the entrepreneur in me but I love creating things. I don’t know what it is, but this company is my heart and soul. So now we clean houses for a living.”

Mike walked me through what business was like in the early days. Like many, he took jobs that weren’t necessarily close by or in the target zone but took them because they were work.

“I was thinking about ways to advertise, but how do you let the rest of the world know about your business without spending a ton of money?” I commented that this is the age old question most of us in business are trying to figure out. “I heard I should try Craig’s List. I was a 45-year-old guy and I had no idea what Craig’s List was. But we started advertising and it blossomed.”

Mike told me a story about a man who responded to his Craig’s List ad who lived in downtown Saint Paul. Mike said, “I was scared at first because bad stuff does happen on Craig’s List. But I went, and turns out he was the nicest guy.” Mike told me this gentleman was moving back to San Francisco and needed the apartment cleaned before he went back. So he brought Mike to the apartment, left him to clean, came back and offered to buy him lunch. Even though Mike declined the lunch offer, he was blown away by the trust this man placed in him.

“These days we have reputation, but still. People are inviting us into their homes even though they don’t know us personally. That’s the one place you feel secure, hopefully. Yet they’re inviting us to clean there. It kind of restores my faith in humanity every time we get a new customer, ya know? Okay, now I’m being overly sappy.” I grinned, knowing exactly what Mike was talking about.

I was really impressed with Mike and his business when he began to talk me through switching to all green products. Freedom Cleaning Services was way ahead of the curve, and he decided to go ahead with switching even when others in the business advised him not to do so. “We were using store bought products,” Mike said. “And I was getting sick from the cleaning products. I thought, ‘There’s got to be a better way.’ At that point the green cleaners were a little more expensive but I thought, ‘This is for my health.’”

I told Mike I completely understood where he was coming from. When I was in college, I cleaned for a few years as a side job. The smells would get completely overwhelming, especially when cleaning for hours on end. “It’s like somebody chloroforming you or something,” Mike commented.

I shared with Mike how back in college when we switched to green cleaners in 2008 I thought we were ahead of the curve. I ask him if anyone was upset with him during the transition. “The green cleaner was an easy sell. One client said, “I don’t have to worry about my kid crawling on the floor, or any of that stuff.  We did have someone who was unsure, so we asked them to try it out for four cleanings. They couldn’t tell a difference, and so they were fine with the switch.”

Like all business owners, Mike had some great stories abou 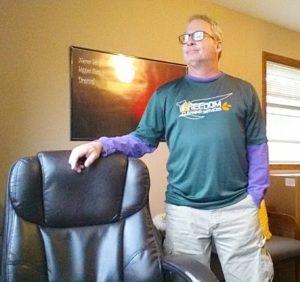 t people he’s encountered during the years. He told me of one phone call from a lady in Georgia who asked him if he cleaned windows. “I said, yeah, I clean windows. She said, ‘Well I got twins…and they lick the windows.” Mike had to stop speaking to allow me finish laughing. “So I get there,” Mike continued, “and sure enough, there were smudge marks all over her windows.”

I guessed that this lady was feeling overwhelmed, and it must have been such a relief to pass the cleaning off to someone else. Mike said, “I had to come up with a tag line for a chamber event once, and on the spot I decided on, ‘Mike Rathbun from Freedom Cleaning Services and we are the wizards of ‘ahhhhhs.’” I told Mike that was brilliant, and this lady who needed her windows cleaned probably felt exactly that way.

Guessing that Mike’s company comprised of more than just him and his wife, I asked him to tell me about the other people he works with. “So, we’re kind of a geriatric company. Everyone is over 50, so we just started joining and splitting up the houses. We’re out there cleaning with them. For a couple of years we took off and only did office work, but it’s nice to be back out there.”

Freedom Cleaning Services currently services Anoka County, and Mike explained to me that the range limitation is good for him and his employees. “We’re not a huge cleaning service like some of the companies you hear of. We’re just a little business.” We discussed the particulars of running a business where a lot of travel time is involved until I decided it was time to switch gears.

I knew Mike and his wife owned a second business that was completely different to what they were dong currently and I wanted him to tell me all about it. “Our other business,” Mike said with a huge smile, “I called two dogs and a cat. I’m the type of person where I have to create. If I don’t, I go crazy. And I wanted to do something positive, something to make people laugh. My wife makes the dog and cat toys and I make the signs.”

2 Dogs and a Cat has all kinds of wonderful fun things in its online store. From funny coffee mugs to inspirational signs, you can’t help but peruse through their products with a smile on your face. The best part is, all the pictures are actually pictures of Mike’s pets. He immediately whipped out his phone to show them. “Our latest dog is Churri Bumbles. She’s 10, and we found her in a shelter in need of a home.” I oohed and ahhed over the picture. “We didn’t name her that, of course,” I grinned, and Mike laughed. “Doesn’t it sound like an ice cream flavor?”

In true dog owner fashion, I also whipped out my phone and began scrolling through the hundreds of pictures of my dog to show Mike. “Oh he’s handsome,” Mike said. I nodded appreciatively, commenting that my dog sometimes feels like my child. Thankfully, I found Mike to be sympathetic to the position I find myself in. “They really are,” he said.

Mike’s other business endeavor seems to showcase why so many of us are in business for ourselves. The desire to create, to do things because we’re passionate about them and make the world we live in a better place. “I’m not rich,” Mike said. “But I’m doing two things I love and making people happy.”

Mike and I continued to talk past the time set for us about our pets and our experiences in the cleaning businesses. I felt th 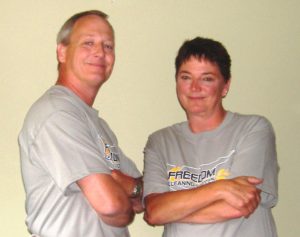 at after we were finished I not only learned something new but gained a friend in the process.

If you’re interested in learning what Freedom Cleaning Services can do for you or if you wish to browse through positive messages, visit freedomcleaningmn.com and www.zazzle.com/two_dogs_anda_cat.