Can I have the name of your chimney sweeper? 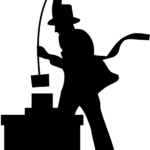 When we bought this house, we had the chimney swept. The guy came in…sweep-sweep…cha-ching. Buh-bye. He wasn’t especially friendly or informative, but the job was done and our house didn’t burn down so I’m okay with that. A few years later, we had a different guy come. Not because there was anything wrong with the first one, but because he didn’t stand out from the crowd. A chimney sweep is a chimney sweep, right? (Unless we’re talking about the guy from Mary Poppins. I’d pay extra for a singing, dancing chimney sweep to magically bring me inside sidewalk chalk scenarios.)

Anyway, enter chimney sweep number two. He was GREAT! I know it’s a bit odd to get this excited over having your chimney swept, but this guy was instantly likable. He showed up with a smile, obviously loved his job, and took his time. After he was done, he gave me a few tips for chimney maintenance and showed me some things I could do myself.  This guy was the sweeper of all sweepers. I happily handed over my money. THIS is what a good chimney sweeper looks like. Who knew?

Fast forward some more. The next time my chimney needed maintenance, I couldn’t remember the sweeper’s name and couldn’t find his card, so I called someone else. I’ve thought about my favorite chimney sweeper many times over the years. Other chimney sweepers have come and gone, but they don’t compare. Not even close. Every time I call one, I hope I get lucky and it’s that guy. So far, no such luck.

My chimney sweeper experience didn’t just teach me about chimneys. I learned a few other things too. First, if you love your job, it shows. It doesn’t matter if you collect recyclables, sweep chimneys, rent out roller skates, or run a million dollar corporation. People can tell if you love what you do. It’s contagious and you’ll be a customer magnet. If you ever find yourself losing sight of that love for your business, you need to stop and regroup. Start delegating the things that make you unhappy and go back to doing the things that originally excited you. (Obviously I know just the people to help with the other tasks. Give me a call.)

Second, stay in touch with your clients and customers.  Have a CRM system in place. Go through your contacts at least once a year and send them something either via email or snail mail to let them know you’re still there. If my chimney guy had kept in touch, I’d still be using him. A person who networks as much as I do could have shared his name a hundred times over the years, but since I can’t remember it, those are missed opportunities. I’m sure you already know this, but if you need help setting up a CRM and maintaining it, I’m happy to send in a virtual assistant to save the day.  We love that sort of thing!

Moral of the story? Don’t be like my chimney sweeper, Mr. Whatshisname. (And if you think you might know him, let me know.)