The other night my husband and I were at a restaurant and the service was terrible. The waitress was obviously new and the restaurant was slammed. Since I’ve been in those shoes a time or two, we kept that in mind and left an 18 percent tip and chalked it up to the good deed of the week. Maybe she really was just a crappy waitress, but we gave her the benefit of the doubt.

When we got home I found the gallon of milk I bought that morning had leaked out of the bottom of the carton and all over the inside of the fridge. By the time I cleaned up that big mess, I was aggravated and grumbly and even stomped around for a few minutes, considered blasting the milk company on Facebook, and then decided my energy was better spent sleeping and went to bed early. 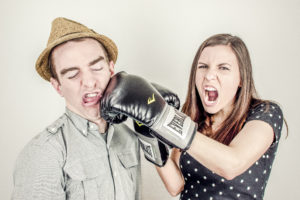 I’m sure you’ve been on the receiving end of bad service at some point.  Either a product went bad or the customer service experience was shoddy – you catch my drift. What did the company/brand do to make it right? Were they helpful?  Did they make it right at all? Did you send an exasperating Tweet, exhausting all of your special characters on bleeping out expletives? Did you act professionally and courteously? If so, how was it met? If it were your business, would you have responded the same way? Too many times people jump the gun and act like third graders calling each other names. In the end, both parties end up looking bad.

As entrepreneurs we have a responsibility to other businesses to give them the benefit of the doubt as well. For example, when you sign a contract with us, I send an email to your assigned virtual assistant outlining the terms and expect both client and VA to treat each other with professionalism and courtesy.  Ninety-nine percent of the time it works that way.  On the off chance it doesn’t end well, I don’t place the blame on one person, even if it the client dropped the ball (it happens, that’s life).  And I certainly wouldn’t badmouth another business on social media.

Social media is amazing and at the same time it’s dangerous. What you post stays there and represents you and your business forever. Technology has relaxed us so much that we seem to have lost our professionalism. Just because you’re able to work in your favorite monkey pajamas doesn’t mean that you get to act like it. There’s still a required give and take and general need for respect in the business world.

Does social media business bashing get you the fastest result? Usually! If I’d tweeted to the milk company I probably would have gotten a big fat public apology and a few cartons of free milk. However, I wouldn’t want anyone doing that to my business so publicly, especially in exchange for a coupon for $4 off their next purchase, so I kept my grumbles to myself.

I think we all need to step back sometimes and take note of our own practices.  Much like many of us were taught as children, it’s important to treat other businesses the way we’d want our own to be treated. If you wouldn’t want anyone dropping special characters on your Twitter page, think about that the next time you’re furious that your can of alphabet Spaghettio’s doesn’t have enough A’s in it. Someday you may need someone to extend the same courtesy to you.

P.S:  Have I mentioned that our virtual assistants can also do online reputation management and run damage control on your social media pages? Give me a call for details.